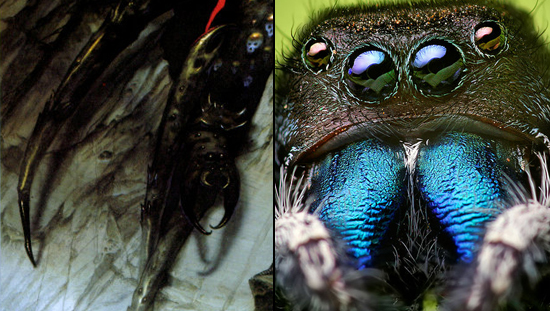 Animals evolve for lots of reasons. Usually to improve methods of finding food, attracting mates, or escaping the notice of predators. We’ve all done it. Evolved, I mean. One vivid example is the butterfly, the world’s most colorful insect. But those vibrant hues and crazy wing patterns were never for our benefit. Nope, they developed to deflect attackers, and we’ve been assuming since the days of Darwin that the perps were birds. Insect-devouring birds. But it turns out that it was probably the spawn of Ungoliant — spiders — who were the villains all this time. And not just any spiders — jumping spiders! These eight-legged creeps are at least partially responsible for the adaptation of the butterfly. 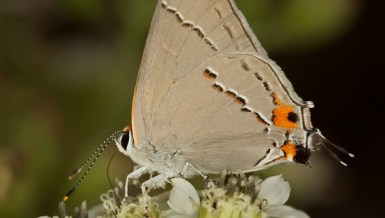 See that pretty orange-and-black head there on the right, with those dainty little antennae? But wait — that’s not the head, is it? Pysche! It’s a fake! This butterfly just fooled you into thinking its butt was its head. Or maybe it didn’t fool you…but if you’re a spider, you totally fell for it. And it’s a good thing, too.

In a paper published in the Journal of Natural History, lepidopterist (butterfly specialist) Andrei Sourakov from the University of Florida asserts that this “false head” wing pattern is way more effective against small arthropods — like jumping spiders — than against large vertebrate predators. How effective? Completely!

Sourakov performed experiments at the McGuire Center using the Red-banded Hairstreak butterfly and unleashed Phidippus pulcherrimus against it. That’s this guy: 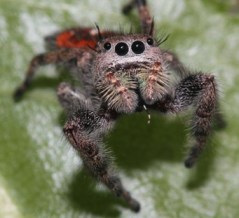 The butterfly escaped the spider 100% of the time, after repeated attacks. Sixteen of them. When 11 other unfortunate butterflies and moth species — each of whom lacked the false head — were exposed to Jumpy the Spider, they all failed. Every one. Sourakov filmed all this and analyzed it in slow motion.

Here’s what he had to say about it:

“From the video, you can see the spider is always very precise. In one video, the spider sees a moth that looks like a leaf and it walks very carefully around to the head and then jumps at the head region. The spider has an innate or acquired ability to distinguish the head region very well and it always attacks there to deliver its venom to the vital center to instantly paralyze the prey.”

My takeaway from this is that while spiders are dumb and easily fooled, they still have an “innate or acquired ability to distinguish the head region.” Which is terrifying. Spawn of Ungoliant, indeed! But if this fake head business is always effective against jumping spider attacks…all I can think is, can’t we hurry up and follow suit? C’mon, evolution!

In the meantime, I suggest we all stay away from the McGuire Center for Lepidoptera and Biodiversity in Florida. They throw spiders at you, then they film it and watch it in slo-mo.

(via University of Florida News, images courtesy of Wikipedia; stefrobb, platycryptus, and motleypixel on Flickr)