The Mary Sue Exclusive Interview: Snowpiercer‘s (and Alien‘s, and Hellboy‘s, and The Elephant Man‘s…) John Hurt 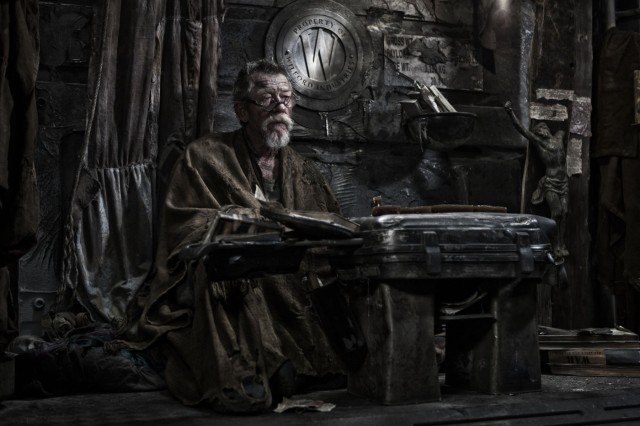 If you haven’t guessed by now, I’m insanely in love with Snowpiercer, the best film of 2014 so far and—yeah, I’ll say it—the best sci-fi film of the last decade. Needless to say, I was very excited to be able to interview the legendary John Hurt about his role in the film, because I love Snowpiercer so very much but also because he’s John Hurt, for Chrissakes. He spent our chat sipping red wine, and I was extremely starstruck. It’s not every day you get to shoot the breeze with an actor of his caliber about… Guillermo del Toro and Pacific Rim? And Snowpiercer and its director Bong Joon Ho, of course, including those infamous cuts that The Weinstein Company wanted to make (but didn’t).

There are brief spoilers, but they’re behind a cut.

Rebecca Pahle (TMS): What was it about Bong Joon Ho’s films that made you want to do Snowpiercer?

John Hurt (JH): It’s really very simple, but I suppose very complicated. But I don’t understand the complications of it—to me, it was simple. I was asked to meet him by my agency—someone had presumably asked after my availablity and so on. And so I went along to meet them in The Soho Hotel in London. And I fell in love with him. [Later I saw] Mother—I think it’s brilliant. And then I saw The Host, and then I also saw Memories of Murder. And all three of them are fantastically good films. And this is a cinema director. And just talking to him… I don’t know… I wanted to work with him, and he wanted to work with me! It can’t get simpler than that.

TMS: You’ve said in interviews before that your criteria for choosing a role is that you can bring something unique and personal to it. What was that thing with Gilliam?

TMS: That’s one of the things I really liked about Snowpiercer—there was no attempt to provide cut-and-dried answers to complex moral questions.

JH: Well there can’t be cut and dried answers, can there? When you’re dealing with a compression of humanity, all in a single train. And the way in which it’s done, which is both comic and tragic. And silly. It’s full of all the nonsense of politics, and yet it’s full of all the passion. Everything that happened in Egypt. It’s all there. And then all this stupid nonsense there as well, all the crazy way in which it all happens. And then ! Of course it’s comic. It’s a comedy. And you never let that go, you never try to say, ‘This is an intellectual film.’ That would have been a big mistake. If you’re going to make an intellectual film out of it, then you have to go very, very different.

TMS: For all that it deals with political themes, and for all that it’s very dark, it’s still a very entertaining film.

TMS: So it makes me wonder, with the Weinstein company—what could they possibly have wanted to cut?

JH: I’ll tell you exactly what Harvey [Weinstein] wanted to cut. All the character stuff. Anything to do with character. He’d keep all the action. And the fans that have seen it—they want to see that which makes the action happen! I’ve had many arguments with Harvey over the years. I’m not saying that i’m anti-Harvey. Harvey did more for European film in America than anybody. He actually imported it. So that you saw over here French, Italian, English, all sorts of films, that you would never have seen if it wasn’t for Miramax. They were brilliant. But we all have our limitations. Harvey’s limitation is—Just don’t try to cut things out! The filmmakers know better than you!

TMS: You’ve done a huge number of iconic films—but are there any smaller ones in your filmography that you don’t feel have gotten as much attention as they’ve deserved?

JH: [The big films] don’t really interest me that much. Films like… well, Love and Death on Long Island I think deserved a great deal more than it got. It got wonderful, wonderful reviews. But it didn’t have the right selling company and so on and so forth, and things have changed. And [Richard Kwietniowski] is a director that ought to be working all the time. Fantastically, fantastically clever.

TMS: So you prefer the smaller, more indie films to the huge ones?

JH: Yes, yes, really. I think that there are generally speaking better, more interesting, scripts… If you put on an Oscar Wilde [play], it will interest those who are interested in Oscar Wilde. But it won’t interest anybody else, because they won’t get that wit. And similarly, there is no playwright in the world—Harold Pinter, Tom Stoppard, whoever you’d like to mention—who’s going to attract everybody. But the blockbuster is supposed to attract everybody!

TMS: To go after the lowest common denominator.

TMS: But every year it seems like there are a few good, original Hollywood films.

JH: In that genre I suppose Guillermo del Toro is nearest. I did Hellboy one and two with him. And I thought Hellboy one was a very good script, truly! Funny. And all those sort of human things that are really great. Inventive and visually fantastic. I thought the second one, not so good. I didn’t think the story was so good, and I didn’t think it gave Ron [Perlman] enough. It was, I suppose—technically it was absolutely brilliant. But that’s where you have to be careful.

TMS: Did you see Pacific Rim?

JH: I did! I saw it with my nephew in Budapest, when it opened there. He wanted to see it. And we went there… it just wasn’t good enough, was it?

TMS: Well, I enjoyed it.

Snowpiercer is now open in limited release across the US, with additional screenings coming throughout July.