Everyone see this movie. Yes? Yes. 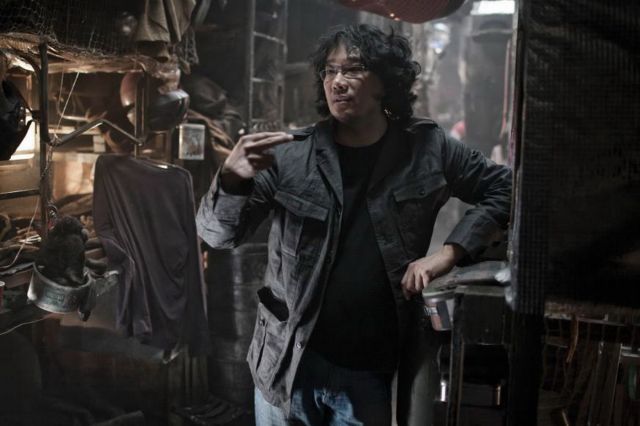 I outlined the reasons I love Snowpiercer in my (spoiler-free) review, but now, as of this week, I have a reason to like director Bong Joon Ho. You know, one that’s not “He makes awesome movies like Snowpiercer and The Host and Mother.” As I was settling in to interview the director, near the end of what was for him a long day of press, a friendly gentlemen approached him and asked: Might he like anything? After a moment’s consideration, he responded, not with water or soda or red wine (which John Hurt was sipping through our interview—check back on Monday for that), but: “I’d really like some ice cream.”*

This is a man who has his priorities in order, with food and with film. Here, we talk about sci-fi, backstory, and Tilda Swinton pulling out her dentures.

Rebecca Pahle (TMS): This is the second sci-fi/horror movie that you’ve done, after The Host. Is there something about sci-fi that appeals to you?

Bong Joon Ho (BJH): If I were to pick my two favorite genres, it would be the crime thriller, or crime drama, and the sci-fi/horror genre. But it’s not like I think of a genre first and go after a script that’s within that genre. It’s really the story or the image or the character that gets me excited. And in 2005 I discovered the source material [for Snowpiercer, a French graphic novel called Le Transperceneige]. So genre itself is just an empty space. Of course there are conventions, but as a filmmaker, what excites me is the particular image that I must shoot or an emotion I want to convey, or a character that I want to explore. That’s more important than the genre.

TMS: So what is it about the graphic novel Snowpiercer was based on that drew you in?

BJH: The situation of just people existing—the space was dark and sad, the last remaining survivors of mankind are inside this train, but they’re also fighting each other. And it felt like the way we live now, in this world. No matter what situation we find ourselves in, there’s no peace. Dystopia, and these types of people… there have been novels and other movies about the subject, but the thing that makes this different is that it all takes place on a train, and a train is a very unique and cinematic space.

TMS: Relating to that, the visuals of the film are so important—the production design of the train, the visual effects. Were you hands-on with that, or was it more a matter of “I’m going to hire people who I know know what they’re doing, and I’m going to let them go”?

BJH: What cars we see, and the order that the train is divided in, or how the train cars are divided, that was really important from the very early point of just writing the script, because the budget was limited, but also because the order of the cars and the way that the narrative unfolds are one and the same. The structure of the train is the structure of the narrative, because it’s a story about Chris Evans’ character going from the back to the front. So that was very important to determine ahead of time. It was all about physically making this space. Before the production designer came aboard, I collaborated very closely with three really talented conceptual artists, and we worked out every detail of the train. And then Ondrej Nekvasil, our Czech Republic production designer, took all those designs and ideas and put his touch on it, and ultimately physically realized the set. And really, this was all about ‘How to do we make this actually work?’ So even if you wanted to defer to the designer, it was just not possible. Because the story is so connected to the space and location that the writing and directing and the production design had to work seamlessly.

TMS: One of the things that I liked most about the films was that there was a real sense of the ridiculous in it.

TMS: Like the Tilda Swinton character, and Curtis slipping on a fish during a fight scene. Is that something that was there in the script? How did that come about? Because it was so much more interesting to me than your typical dark, depressing dystopia.

BJH: Captain America slipping on a fish was in the storyboard. It wasn’t in the script. In the storyboards I added the fish-cutting ritual before the axe battle begins. I wanted to put the fish back in there somewhere, so I decided to have our hero slip on the fish, which would add a little more tension. It actually wasn’t intended to be funny. So I think it’s serious—it’s all about Curtis is in danger, but I guess people thought it was weird.

TMS: Well I didn’t think it was funny like “Ha ha” funny, but it was a little bit like… I’m not sure what I just saw here?

BJH: The same thing happened on The Host, where in Japan especially people didn’t know if it was supposed to be funny—if they were supposed to laugh—or if they were supposed to be sad. And the reaction was kind of diverse, or different. And these types of moments are generally kind of awkward for the audience, and I like that, because I think life is like that. It’s not like something happens and everyone knows “Oh, this is a funny moment,” or “Oh, this is a sad moment.” It’s not really divided like that. People laugh when Tilda pulls out her dentures—was that funny for you?

TMS: Strange, yes. It tied into what Wilford says near the end, that the train has driven everyone a little bit insane. It contributed to that sort of off-kilter tone throughout the entire film.

BJH: If you had these moments all throughout a two-hour film, you couldn’t actually do it. But every once in a while it’s good and it’s fun to do. With the dentures, for instance; that wasn’t in the script. It was something that came up on-set, talking to Tilda, and we thought it was a fun idea. Actually, while I was shooting it, that’s when I started thinking, “What does this mean?” “Why am I shooting this?” And it’s just fun to try and think about the reasons.

TMS: Did you discuss backstory with the actors at all? Because Snowpiercer is this huge, rich world, but there’s so much you don’t see onscreen.

BJH: It’s not really my usual approach. I like to just go off the emotions of what you see and what’s actually happening, instead of relying so much on a backstory. But this is a different case. The past is really important to the setting of the story and the world. And there are so many untold stories… [we get some of the backstory in the film], but it doesn’t really go into it. It couldn’t, because there’s just not enough time. [For example], with Nam and Yona: They look out the window at the frozen Inuit woman, who, there is a slight suggestion, could have been Nam’s wife and Yona’s mother. That story we don’t know all the details of.  All these things, if you go into detail, could be a 16-part miniseries on HBO. This film, it’s all very condensed. And, if you will, the story has a lot of layers and is very dense because of it. It’s, in a way, the exact opposite of Gravity, because Gravity is a very simple story. Even though [Ryan Stone] talks about her past and losing a kid, it’s really about, How is she going to survive and return to Earth? And it’s something the audience experiences with the character. And I really love that movie, but it’s different. There are pros and cons to Snowpiercer versus a story structure like Gravity.

TMS: It’s interesting that you bring up Gravity, because it and Snowpiercer both stand out from the pack in that they’re sci-fi films that aren’t sequels or part of a franchise. As someone who works outside of Hollywood, do you feel that there’s a lack of originality there?

BJH: Sequels, remakes, or even the word ‘reboot’ is used so often. And it’s strange, because with such a big industry with a long tradition, why do they go for these types of remakes? I don’t know. But if you look at Cuarón and Gravity, and Christopher Nolan and Tarantino, they’re all writer-directors, and they all create their own worlds. So i’m not really worried–I think there are unique films still being made. And of course I grew up watching Hollywood films, so that’s a big part of my filmmaking as well.

TMS: Would you ever make a Hollywood film?

BJH: After Cannes and Toronto, when I showed The Host, a lot of agents from Los Angeles contacted me. And I’ve been with the same agent for the last seven years, and I’ve been getting a lot of scripts ever since then, and some of them have been good. But I’m a writer/director, and I always have to write. Just inevitably, Korean aspects kind of find their way into the story. And maybe my tastes are different than what’s accepted in Hollywood or appreciated in Hollywood. But ultimately it’s about the story. I have to like the story. I actually came really close to doing a Hollywood film, a mid-range sci-fi film last year. I got an offer. It didn’t pan out, but maybe one day there’ll be a situation where the studio will respect my concept and give me the freedom to rework the script or write it myself. I just don’t think that I could be a director for hire.

TMS: I’ve read that you were unsure at first about Chris Evans as Curtis—I just wanted to ask if that was true, and what is it that convinced you that he’d be the best actor for the role?

BJH: Actually, that’s not true. I never thought that Chris was a strange idea, or was against it. I actually feel very thankful that Chris was interested in such a film, because he works on $100 million, $200 million blockbuster Marvel films. But actually, between those films he does smaller, more serious independent films like Iceman and Puncture. Actually Chris was suggested by our casting directors Johanna Ray and Jenny Jue, who reminded me that Chris was in movies like Sunshine and suggested that I watch Puncture, where he plays a drug-addicted lawyer. and I realized that Chris has a pretty broad range and the ability to do other things than just Captain America. So it became a very natural choice.

*Yes, he got the ice cream.

Snowpiercer opens in New York, Los Angeles, San Francisco, Austin, and Seattle this weekend and will expand to additional cities throughout July. To see if it’s coming to a theater near you, visit the official site.