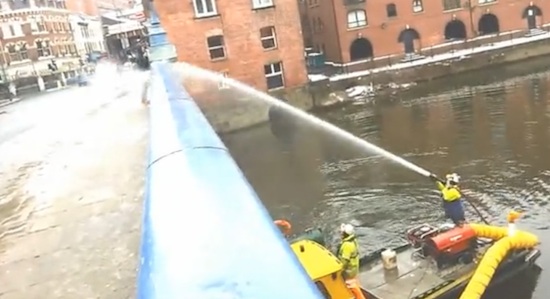 This guy probably thought that pelting a couple of municipal employees — who look for all the world like they’re just minding their own business here — with a snowball would be good for a chuckle. After all, these guys work for the government. It’s not like they’re allowed to just turn that hose on anyone who messes with them, right?

To learn a valuable lesson about the true meaning of justice and why you should never, ever pick on someone because you think they’re going to be unwilling or unable to retaliate, check out the video below.

We’re trying to figure out where this was taken — somewhere in the UK, we suspect, judging from the accent of at least one onlooker — and if we find out anything else, we’ll let you know. Otherwise, just enjoy seing someone get whats coming to him by the gallon.

UPDATE: It appears that the video was taken on a bridge in Leeds, England  near the Adelphi Hotel — thanks to @easyqueenie for the heads up!