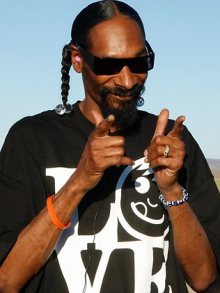 The stereotypical reaction to a male having a midlife crisis is usually for him to buy some overpriced, silly car, or to start dressing like the young kids and begin going to youth hotspots once again. Esteemed rapper Snoop Dogg, turning forty-one in two months, might be having a midlife crisis, but isn’t dealing with it in some sort of stereotypical way. He’s rich and can blow money on fancy cars whenever he likes, and the kids dress like him due to his iconic status. So, what’s a Snoop Dogg to do when he really needs to have some sort of crisis? He experiences a spiritual awakening and sheds the old Snoop Dog form to become Snoop Lion. Really.

Snoop is going through what could be his midlife crisis during the right time, as he’s working on a new album. Titled Reincarnated, the new album has a reggae focus, rather than the normal gangsta rap to which we’re accustomed. Speaking to reporters at New York restaurant Miss Lily’s, Snoop said “the spirit” guided him to Jamaica and also guided him to make a reggae album. He said he wasn’t planning on venturing into reggae, but, basically, the spirit made him do it. He also stated that he didn’t just want to be Snoop Dogg making a reggae album, but to bury Snoop Dogg and become a reggae artist for the album.

Snoop then held a spiritual meeting with a high priest, where he — true to his Snoop nature — smoked marijuana with Rastafarian priests, who then named renamed him Lion. Thus, Snoop Lion was born. As for what kind of music Snoop Lion makes, it’s a departure from his usual rapping, as he mostly sings and the lyrics are more of the peace and love variety rather than gin and juice. One new song is cited as a departure for Snoop; called “No Guns Allowed,” Snoop calls for a ban on handguns, something not particularly gangsta. He said he “always wanted to make a song that could really stand for something, [but] could never make a song called ‘No Guns Allowed’ because [he] was supposed to be a gangsta.”

Unfortunately for fans of Snoop’s rap, he said it’s not a challenge for or appealing to him anymore:

“Rap is not a challenge to me. I had enough of that. It’s not appealing to me no more. I don’t have no challenges.

I’m ‘Uncle Snoop’ in rap. When you get to be an uncle, you need to find a new profession so you can start over and be fresh again. I want to be a kid again.”

Snoop also said that due to his genre of music, his shows weren’t appropriate for kids, and he’s always wanted to perform for kids. I apologize if Snoop is shattering your hardened, gangsta heart right now. He notes that reggae is more accepted by a wider audience than gangsta rap:

“I’ve always wanted to perform for kids, my grand mother and people around the world that love me, can’t accept the music that I make. This reggae music is the music of love, happiness and struggle.”

However, Snoop said that he’s not entirely done with rap just yet, so there’s always hope for those who wish to see him in a backwards bandanna and long white t-shirt once again. Just remember to call him Snoop Lion from now on.