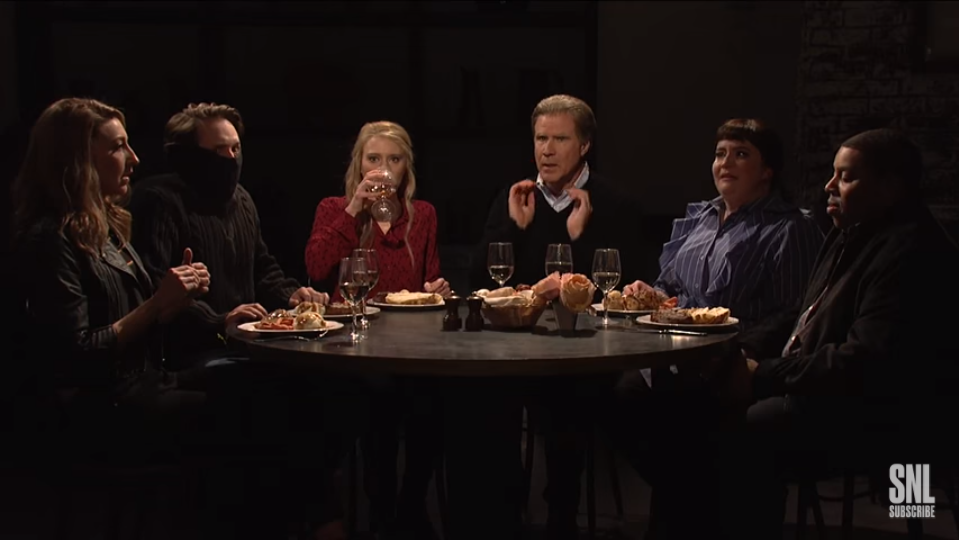 (I know, I know, two SNL pieces in a row. But this topic’s important!)

Last night, Saturday Night Live (SNL) looked at our national reckoning with sexual assault in multiple sketches. None of them were as deeply misguided as James Franco’s harassment-minimizing skit (which looks even worse in retrospect), but a number of my friends had mixed reactions to some of them, so I’m really curious to see what all of you thought about how they handled these issues. Comedy’s subjective, and I always find all your different reactions interesting and enlightening.

“Next” was a pretty spot-on fake commercial for Next, “the only antiperspirant for men who are feeling the heat, because their #TimesUp.” It totally captured the tropes of male deodorant commercials, with lines like “You’re a man. And men sweat.” and “I work hard. I play hard. And something’s coming out about me real soon. Because I’m … Next.”

Plus, they completely nailed the tone of accused predators’ denials when Alex Moffat’s accused actor says, “Lots of women are brave, but this one’s, um, a liar. And no comment.” Lots of men are sweating right now, for exactly this reason, and I loved that SNL went ahead and made those predators the butt of the joke.

I couldn’t decide where I landed on this one, so I’m curious to see what you all thought. When I first watched it, I really enjoyed the premise and the way it captured the “surprise” of realizing that some old songs are way creepier than you remembered. It felt very realistic, like the first time you realize that the lyrics of “Baby, It’s Cold Outside” take a super-predatory turn, or when you find out ABBA wrote a song called, “Does Your Mother Know.” But there’s something inherently uncomfortable about making a jaunty punch line out of … well, abuse. I watched the skit twice, and I felt differently about it each time.

The skit is structured in such a way that the laugh lines are about a dude preying on children. And I recognize that it’s the shock factor, and the realization of what he’s saying, that’s meant to make you laugh, rather than the content of the lines themselves. But as they accumulated, it started to feel more like the punchline was the sad-sack humor of creeping on thirteen-year-olds, and that’s not funny stuff for me.

But then, I really liked it the first time. So that second reaction might’ve just been because I watched it twice, and I therefore saw the joke coming. I’m still not sure, folks, so I’m curious how you all feel.

In “Dinner Discussion,” three couples are chatting at a restaurant when one of the women brings up the Aziz Ansari allegations to ask “what everyone thought.” As we’ve seen, our national conversation around these allegations has been F-R-A-U-G-H-T, with reactionaries claiming we’ve gone “too far,” feminists pointing out that this problem is not new, and millions of people having to hold earnest, uncomfortable conversations about the ways we teach and conceptualize consent for the very first time.

The dinner guests tread accordingly carefully, cutting themselves and each other off halfway through any thought or sentence.

“I think that some women…”

“While I applaud the movement…”

Now, some of my friends interpreted this skit as mocking the fact that “PC culture” makes people so afraid of giving offense that they can’t have an honest discussion. However, I personally didn’t get that read at all, so I am curious what you all thought. To me, this skit was about the fact that, despite increasingly mainstream acceptance of feminism, we still really, really don’t know how to talk about rape culture and consent. “Everyone, stop,” Aidy Bryant’s character says. “We can talk about this. We are adults.”

But, as a society, we really can’t. We don’t have the language for this kind of discussion, and women’s comfort has been considered irrelevant for so long that we don’t have the language to describe and categorize coercion of the kind that Ansari is alleged to have used. I loved that the sketch went full-absurdity, with the witchcraft and hair-cutting and stabbing, to demonstrate just how strangled we are by our lingering Puritanical roots, and by the fact that our cultural views of sex have been so patriarchal for so long.

But how did you read this one? Did you read it as a reactionary indictment of PC culture, like some of my friends did? Or did you land closer to my take?