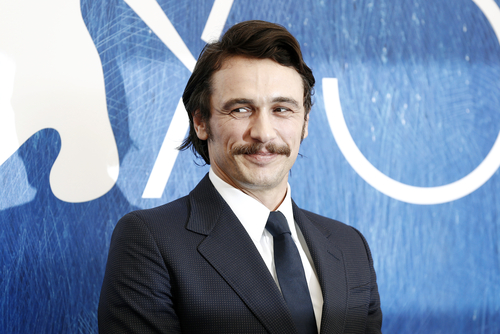 No pin is large enough for James Franco to hide behind and no amount of black clothing can hide his terrible past. Franco attended the Golden Globes last night where he won the award for Best Lead Actor in a Comedy for The Disaster Artist. He wore a black suit with a Time’s Up pin in support of the night’s protest against sexual harassment, assault, and misconduct. Franco’s gesture and the Golden Globes’ decision to honor him, many pointed out, felt like an insult for a night that was intended as a protest and opportunity to support survivors and victims.

“Why is a man hosting? Why is James Franco allowed in? Said too much. Nite love ya.”

“Ok wait. Bye. Christian Slater and James Franco at a table [at the] Golden Globes #MeToo.”

Sheedy worked with Franco in the 2014 off-Broadway production of The Long Shrift. Others pointed to the incident in 2014 where the actor was caught trying to arrange a hotel hookup with a 17 year old. At one point during the news cycle, he tweeted, “I HOPE PARENTS KEEP THEIR TEENS AWAY FROM ME.”

On Twitter, two more women shared experiences with Franco acting like a predator and criticized his hypocrisy of wearing the Time’s Up pin:

Cute #TIMESUP pin James Franco. Remember the time you pushed my head down in a car towards your exposed penis & that other time you told my friend to come to your hotel when she was 17? After you had already been caught doing that to a different 17 year old?

Hey James Franco, nice #timesup pin at the #GoldenGlobes , remember a few weeks ago when you told me the full nudity you had me do in two of your movies for $100/day wasn’t exploitative because I signed a contract to do it? Times up on that!

Pretty sure this would be my face too if I was Hugh Jackman losing to James Franco, a gross predator of underaged girls who wore a TIMESUP pin to this stupid event and didn’t even get called out for his hypocrisy by Hollywood 🙄 https://t.co/T1QUTq9CJ5

After my profile of Franco was published, some people reached out to tell me about encounters with him. I knew a story was being worked on by some reporters, but these folks got impatient. It’s hard to watch someone who hurt you be lavished w/ praise. https://t.co/GPNVIMlWhO

Franco spent a short time in Halifax and I heard literally nothing but creepy things https://t.co/rg5WYDC1AG