Skyrim is Here, Along With Bethesda's Enormous Ambitions 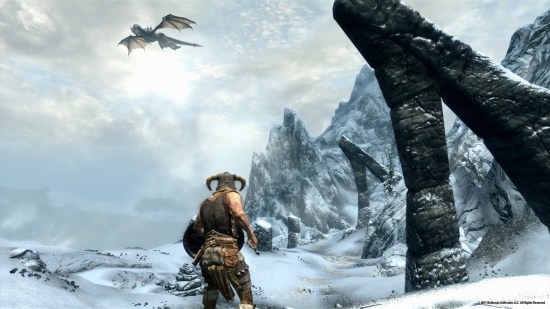 As I write this, I am anxiously awaiting the delivery of The Elder Scrolls V: Skyrim. I’m not waiting because I have to — it’s my day off — and I’m not anxious because it’s a game with “Elder Scrolls” slapped on the front. I’m waiting because Amazon’s release date delivery can sometimes mean the product showing up around eight at night, and I’m anxious because I loved Fallout 3.

It should probably be noted that I avoided the other games in the Elder Scrolls franchise like the plague. I have had The Elder Scrolls IV: Oblivion available to me for a long time, both on the PS3 and on PC. Steam has a way of making you purchase games you might never play by dropping their prices to the point where you absolutely have to buy them. I mean, c’mon, who could resist Oblivion and all of its DLC for $10? Seriously.

But even with my love for role-playing games and the sheer fact that I’ve had the game right next to me all of this time, I have instead chosen to play other games in front of Oblivion. Dragon Age II, The Witcher 2 and others have all come and gone while Bethesda’s last Elder Scrolls game laid dormant on my hard drive. I just had no desire to play; it was like a black hole of apathy whenever I considered it.

But Fallout 3 made me fall in love with the ambitions of the Bethesda team at their best. Maybe my hesitation to go back was in part because I felt I’d been spoiled by Fallout 3 and the various iterations made between 2008 and Oblivion’s 2006 release. Now, however, this is the next Bethesda developed game after Fallout 3 and my interest is piqued.

I wouldn’t miss this one for the world.

This is interesting given that it’s the world within the game that I’m truly interested in. Bethesda is one of the developers on an increasingly smaller list that are actually ambitious in scope. There is a wide, wide world out there with many, many possibilities to be explored, and the developers encourage the players to go forth and make their own future. This is contrary to the trend seen within many of their colleagues’ works over the past few years.

When compared to the original Dragon Age, Dragon Age II feels like a change of pace because the world itself doesn’t feel as large. Though both utilized a system of fast travel that meant the player couldn’t simply walk between destinations, the second favored placing the entire plot within a single city and the surrounding countryside while the first felt like a complete nation with a variety of locations.

BioWare, by and large, has instead chosen to be ambitious with their focus on characters, quests and interactions, while Bethesda continues to be ambitious in scope. That isn’t to say that BioWare or Bethesda is better than the other. They just so happen to be chasing distinct and separate goals. Unfortunately, they are both nearly alone in their field in terms of ambition; no other developer truly focuses on characters like BioWare [editor’s note: Except maybe one] and no other developer truly focuses on scope like Bethesda.

Some people — like Geekosystem’s own James Plafke — might find my enthusiasm for Skyrim to be a bit odd considering my dislike for Oblivion. In his words, “Skyrim is a prettier Oblivion.” I won’t argue the point, as I still don’t have it in my hands, but what I will argue is that there was a game between here and there. The development of Fallout 3 can’t simply be ignored; the trials and tribulations as well as the successes encountered there have surely helped spawn this newest installment of The Elder Scrolls.

If they have only taken away from Fallout 3’s development cycle that there should be multiple meaningful DLC packs, I will be happy. But I suspect they will have also learned how to properly pace open exploration given that the environment felt open in the Wasteland, but not completely devoid — there always seemed to be a purpose or place to go. If they haven’t taken these lessons and applied them, I don’t really know how I’ll feel.

But regardless, Skyrim is coming. And I am waiting.