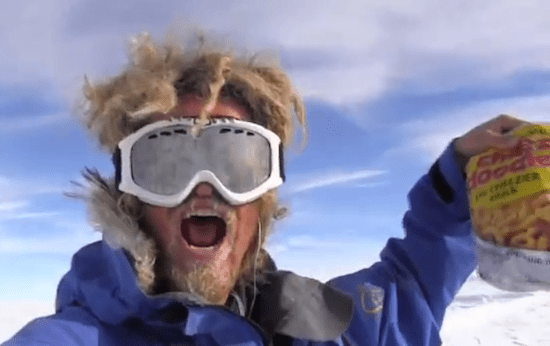 As a sterling reminder that it’s the little things in life that matter comes this recent video from Norwegian outdoor sports enthusiast and freelance journalist Aleksander Gamme. For three months through 2011 and 2012, Gamme embarked on a solo cross-country ski trip to the South Pole and back. After 86 days of travel, a few days from the end of his return trip, he came across a cache of supplies he’d left while heading inland. What he’d forgotten was the chocolate and cheese doodles inside.

Gamme writes that as a motivator he hadn’t recorded the full contents of the cache, hoping to forget the goodies inside during the nearly three months since he buried it. This was, in fact, the case, leading to this reaction:

In his Reddit AMA, Gamme talks about his experiences out on the frozen wastes. During his trip, he said he encountered no wildlife aside from a few other travelers and largely enjoyed the isolation. He was, however, not without some creature comforts. He says that he listened to podcasts, took language courses, and listened to music on 3 iPods for most of the day and watched movies on a Samsung Galaxy at night. He also had a satellite phone to report his location from time to time.

One question that was frequently asked of Gamme was how he coped with the isolation. Gamme wrote:

I have answered that further up, but i think its weird that everyone think you will get crazy if youre spending time on your own.. well, I guess you can, but it`s basically the other way. Sitting here in front of the computer makes me crazy. Living my dreams make me …live and love it.’

Kinda makes me want to run outside, but maybe not all the way to the south pole.