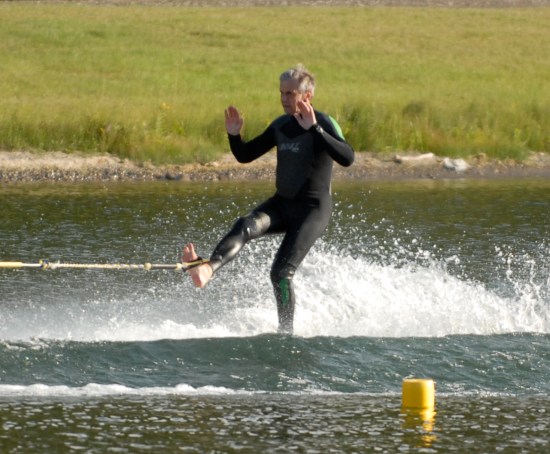 Long and gangley in his youth, Davis never felt coordinated unless he had a board or two attached to his feet. Skiing, whether on snow or water, has been a lifelong passion. Most other forms of exercise, including the infamous Grouse Grind are considered training for skiing. Still, he has been reluctant to ‘retire’ and devote himself full time to skiing as many of his skiing friends have.

In fact, his twin passions for acting and skiing crossed paths in his 2008 short film Reverse, which Davis wrote, directed, and starred in. The image above was taken from the film, a copy of which can be found for sale on his website.

Note that I said “champion” water skier. Davis skis competitively in the 65-70 age bracket. In 2008, he told Brendan Beiser that he in fact has held two records. He says he has the current record for tricks in his age category and used to have the slalom record until it was snatched from him by a younger competitor.

Davis was, as we all remember, fantastic on The X-Files, and it only warms the cockles of my heart to find out he’s a cool dude in real life.