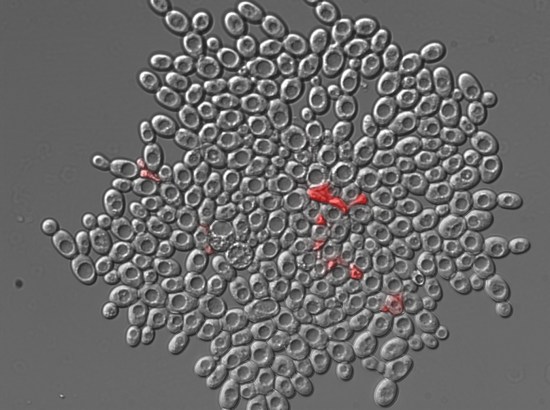 There’s a number of puzzles about the beginnings of life on Earth that continue to evade scientists. One of them was a pretty fundamental question about how life made the jump from single-celled organisms to the multicellular marvels we’re familiar with today. Researcher Will Ratcliff at the University of Minnesota wanted to look at how that process may have occurred and discovered that it might not have been so big a leap after all.

Using Saccharomyces cerevisiae, also known as brewer’s yeast (or deeper still, the stuff that makes bread and beer work), Ratcliff designed a rather simple experiment. Yeast, which is a single-celled fungi, can form multicellular colonies like mold. In his experiment, Ratcliff placed yeast cells in a highly nutritious medium to grow. He then placed test tubes full of the growing yeast into a centrifuge.

The spinning action of the centrifuge caused the yeast to separate, with the heavier multicellular clusters at the bottom and lighter single cells at the top. Ratcliff’s team skimmed off the single-celled yeast, transferred the multicellular colonies to the fresh growing medium and repeated the process. This went on for 60 days, and in that short time, Ratcliff saw a dramatic change.

Instead of small colonies and single cells, the yeast began forming large, complex groups. These mosaics of hundreds of cells weren’t simply random, either. They were clusters of genetically related cells which remained attached after dividing. Even more exciting, Ratcliff observed that once the clusters reached a critical size, cells would begin to die off and the cluster break apart.

Far from being a failure, this process of cell death — called apoptosis — broke the colony into smaller pieces that continued to grow. In effect, the break up of the colonies fostered new colonies, like a form of reproduction. The National Science Foundation quotes Ratcliff as saying this process is a vital observation:

“A cluster alone isn’t multi-cellular,” Ratcliff says. “But when cells in a cluster cooperate, make sacrifices for the common good, and adapt to change, that’s an evolutionary transition to multi-cellularity.”

Ratcliff’s surprisingly easy experiment might suggest that the process of achieving multicellularity is far easier than previously thought. However, his work could have practical application as well. Using his record of multicellular yeast, he plans on investigating what adaptations are responsible for making the single cells become cooperatively multicellular. Identifying a gene that allows this behavior could, for instance, be used to better understand cancer.

Future research aside, Ratcliff and his team have already achieved remarkable results. Their work has shed light on a critical turning point in the history of all life on this planet.