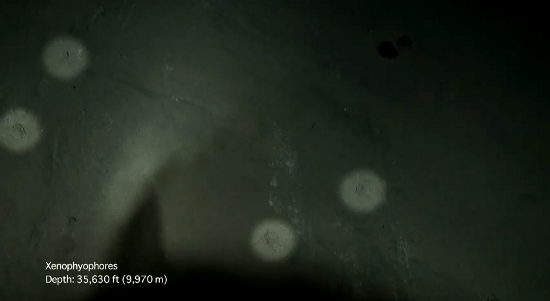 If you haven’t heard of xenophyophores, you’re probably in good company. First thought to be sea sponges, these ocean dwellers have been tossed around taxanomically for nearly a century until finally settling into their role as the world’s largest single-celled organism. A recent expedition to the Mariana Trench by National Geographic spotted the strange creatures some six miles under the ocean, the greatest depth at which xenophyophores have been found.

Though they come in different shapes and sizes, xenophyophores are widely distributed throughout the world and can live in truly brutal conditions. This is partly due to their ability to eat sediment and tolerate high levels of heavy metals like uranium. In addition to their weird single-celled status, these creatures also secrete a kind of organic cement and build their bodies out of whatever is lying around nearby. Amazingly, they can grow to pretty spectacular sizes. The ones recently found in the Mariana were about four inches wide, and they were not even the largest on record.

The video is blurry, but the science is amazing.