"Living Fossil" Coelacanth Flourishes off the Coast of Africa 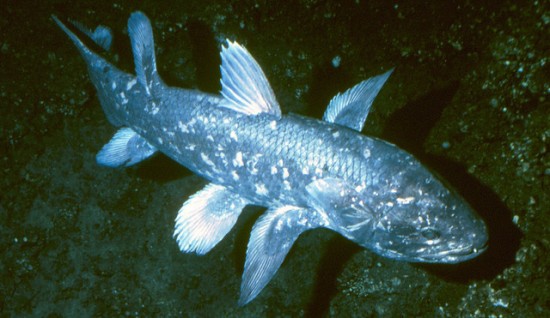 The coelacanth is a fish that belongs to a family of fishes that were very common in the Devonian period of the Paleozoic Era, about 400 million years ago. So what? Well, the coelacanth is actually thriving along the African coast whereas all its relatives went extinct or evolved beyond recognition in the intervening hundreds of millions of years, making the coelacanth what some people call a “living fossil.”

What’s more, it appears that there are two distinct populations of the creatures, one living in the the Cormoros, a set of islands near Madagascar and the other living all up and down the African coast. At first, it was thought that the two populations must have split off from each other fairly recently, due to prevailing currents or some other factor. Researchers recently took a look at the mitochondrial genome of 23 of the fish and made an unexpected discovery: The two groups split, at the very least, hundreds of thousands of years ago.

And hundreds of thousands of years is only the low estimate. Based on comparison to some different species from the pacific, the researchers believe that the two costal populations could actually be separated by millions of years of evolution. If you’re having trouble making heads or tails of those kinds of numbers, consider this: Polar bears are thought to have evolved from brown bears in less than 200,000 years. These fish are old school.

The downside is that the population on the African coast has unfortunately staked out a spot that is being ravaged by over-fishing. Granted, it seems like these fish have been able to survive a lot, but considering how miraculous it is that they are still around, there’s no sense in taking any chances.