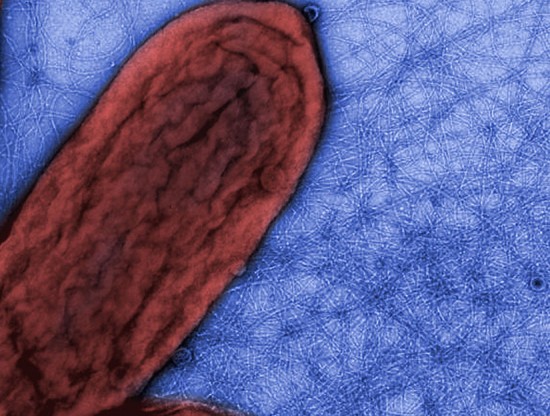 Researchers have created what they call a “living nanowire” using an usual type of bacteria that has long filaments outside its body and conducts electrons better than some metals. This could be an important first step in merging biological systems with electronics for small organic batteries or biological superconductors that are much cheaper to produce than silicon-chip based technologies.

The research was conducted by a team from the University of Massachusetts at Amherst. Lead author on the paper, Mark Tuominen, explains that humans and animals typically get rid of electrons through breathing, but the bacteria get rid of electrons through their pili, the long filaments that are used as the nanowire. In the bacteria these electrons are created as a byproduct of the digestive process, because bacteria living in anaerobic zones don’t have oxygen molecules to carry any electrons like humans and animals do.

Published in the journal Nature Nanotechnology, the research describes the pili as spaghetti-like strands that are 10 to 20 times longer than the bacteria itself. The bacteria is the single-celled Geobacter sulferreducens, which was discovered in the 1980s. The researchers began their experiment by making a small electrode and growing a biofilm of the bacteria around it. They then measured the conductivity of the organism by passing an electric current to the bacteria through the electrode.

“These nanowire networks showed the same properties of metal networks. We didn’t think nature could make something similar to metal. This is the first time this has been discovered and this is very exciting for us.”

Researchers predict that these living nanowires could be used to build better batteries more powerful than your standard chemical based Energizers. Touminen also says that these potential batteries could even be used underwater where using standard electronics is a no-go. Water-based sensors and energy storage conversion devices are two things that could be developed using this technology. Any battery made with this technology will also be inexpensive. Touminen says:

“A big plus is that these materials do not require any rare or expensive feedstock materials. They will be cheap to produce because they are nature designed and nature made.”

There is no word yet about when or how this research will be translated to the development of these biological batteries, but it is the first step towards making them a reality.