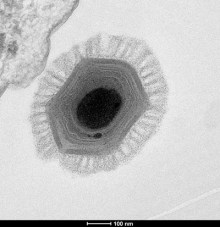 It’s huge, it’s hairy, and it reproduces by infecting other bacteria. It’s Megavirus chilensis, and it has been confirmed as the world’s largest virus.

Discovered off the coast of Las Cruces, Chile, Megavirus is about 10-20 times larger than the average virus. Measuring in at an astounding 0.7 micrometres, it’s large enough to be seen with only a conventional microscope and not an electron microscope. The oceanic virus beats out the previous largest virus, Mimivirus, which was discovered in a UK water tank in 1992. Thankfully for humans, Megavirus isn’t interested in hijacking our cells for its reproductive needs. Researchers think that Megavirus’ prey of choice are bacteria. Like Mimivirus, Megavirus is covered with fine, hair-like structures that the team thinks are used to lure unsuspecting bacterial prey. Strangely, Megavirus is so large that it dwarfs some bacteria in sheer size.

But what’s really incredible about Megavirus is that it might force scientists to rethink how viruses came about. After analyzing the genes of Megavirus, the researchers found over 1,200 genes. When compared to Mimivirus, they found that the two shared many important genes, namely those associated with copying RNA to the host cell.

This means that the two are cousins, genetically speaking. However, the researchers took their work a step further and compared the Megavirus genes to eukaryote cells — these are cells with membranes that enclose other structures. Here too they found many similarities, leading the team to suggest that the two viruses may have descended from organisms that over time developed the parasitic tendencies of a virus. This would place Megavirus and Mimivirus in a class all their own from other viruses.

If further research supports their hypothesis, the researchers could have tacked down a bizarre backstory to these giant sized viruses. In the meantime, we’ll just have to sit here, mildly worried about gigantic viruses crawling all over us.