Review: Mike Judge’s Silicon Valley Is the Geek Show TV’s Been Waiting For

I really loved it, but where are the women? 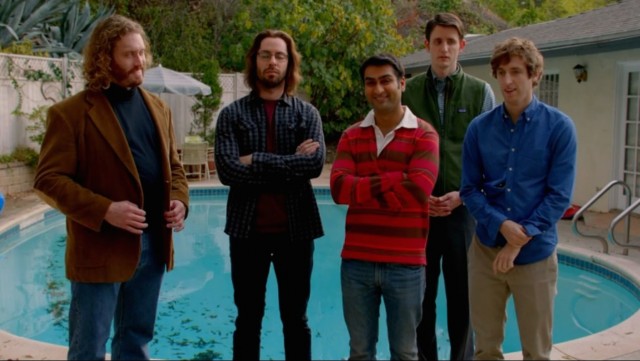 At SXSW this week, I got to see the first two episodes of the new Mike Judge HBO show Silicon Valley, which follows a group of developers as they stumble onto success with a unique algorithm. That may sound very similar to Amazon’s Betas, but Silicon Valley shows there are more important things than being first to market.

HBO recently released a trailer for the show:

That trailer left me a little underwhelmed when it first came out, but given the impressive cast and Mike Judge’s track record of creating shows I love, I still had high expectations, and the show didn’t disappoint.

The main focus of the show is Richard, played by Thomas Middleditch. His app, Pied Piper, is intended to help musicians check to see if their song sounds too similar to other songs, but it’s the compression algorithm it uses that starts a bidding war from two huge tech companies. Richard has to decide between selling the algorithm for millions of dollars, or taking a lot less money, but retaining control of his company.

There’s a great scene with Andy Daly (seen briefly in the trailer) as Richard’s doctor who tries to advise him about what to do. That scene in particular made me miss King of the Hill and wonder what Silicon Valley would have looked like as an animated show rather than a live-action one.

There are obvious parallels to be drawn to the Amazon original series Betas, which tells a similar story of a similar group of developers in a similar position. In Silicon Valley, one of the super-rich CEOs even comments that groups of developers are all very similar, and he breaks down the stereotypes. I recently binged the first season of Betas, and while I really enjoyed it, I have to say the biggest different between the two shows is quality. HBO is throwing a lot more money into Silicon Valley than Amazon is into Betas, and it shows.

It almost feels unfair to compare an Amazon series to one on HBO, but they have a lot in common. Betas is one of the better original online series I’ve seen, but it still plays as low-budget and amateurish compared to Silicon Valley.

One of the biggest challenges I see this show facing is that compared to the rest of the cast, Middleditch is relatively unknown. That’s not to say he isn’t great on the show, but he’s not really a name a lot of people know. The things I most recognize him from are some of the Pete Holmes Show sketches we’ve covered. He played both Gambit and Nightcrawler in the Ex-Men series, and here he is as Vega being told he can’t use his claws.

The rest of main cast should be more familiar. Middleditch is joined by Martin Starr, Kumail Nanjiani, T.J. Miller, and Zach Woods, all of whom have had some success playing the weird guy on other shows and more likely to draw viewers.

I don’t think Middleditch will have any trouble winning viewers over. He’s perfect as the stressed-out guy in over his head, but it’s still a hurdle—a low hurdle, but a hurdle. To say this is one of the show’s biggest problems is really to say the show doesn’t have a lot of problems at all.

The almost complete lack of female characters likely won’t sit well with everyone. In the first two episodes, the only women I remember seeing were Monica, one of the powerful male CEO’s assistants played by Amanda Crew, and “Mochachino”—a stripper—played by Porscha Coleman. Neither play that much of a role in the plot of the episodes I saw.

During the Q&A after the screening, both Mike Judge and TJ Miller tried to make the point that there aren’t a lot of women in that world, so the show isn’t an unfair representation. Judge even mentioned that for research they attended the TechCrunch Disrupt event last year, and he estimated that only 2% of the attendees were women.

That may be true, but one thing Betas has going for it is a pretty diverse cast, and it doesn’t feel like an unrealistic representation. Silicon Valley is wonderful, but it feels like a missed opportunity to highlight the women that are working in the tech world to hopefully inspire more women to get involved in the future.