Lest you foolishly doubt her science cred, we have the two papers she coauthored. 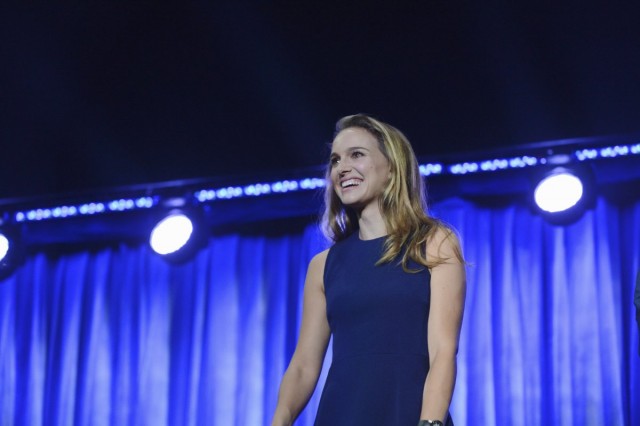 Natalie Portman and Marvel have teamed up to offer girls a chance to get involved in science, technology, engineering, and math (STEM) with the Ultimate Mentor Adventure. Portman is more than just a face on the campaign, she has a legitimate science background and was the coauthor on two papers. We tracked them down. Take a look.

The Ultimate Mentor Adventure works to help pair high school girls with mentors in STEM fields near their homes. They can upload videos of the work they do with their mentors, and winners will be selected to fly to Los Angeles for an epic science adventure including a trip to a Thor: The Dark World screening preceded by a documentary about their work. It’s something Portman is passionate about, and has a background in.

Besides her on-screen credits, Portman is a Harvard graduate with a degree in Psychology, and it seems that her education is more important to her than her career in film. In 2008 she told Fox News, “I’d rather be smart than a movie star.”

Thankfully, she can be both.

While still a high school student at Syosset High School on Long Island, Portman (Then, Natalie Hershlag) coauthored a paper titled, “A Simple Method to Demonstrate the Enzymatic Production of Hydrogen from Sugar.” The abstract for that paper reads:

There is current interest in and concern for the development of environmentally friendly bioprocesses whereby biomass and the biodegradable content of municipal wastes can be converted to useful forms of energy. For example, cellulose, a glucose polymer that is the principal component of biomass and paper waste, can be enzymatically degraded to glucose, which can subsequently be converted by fermentation or further enzymatic reaction to fuels such as ethanol or hydrogen. These products represent alternative energy sources to fossil fuels such as oil. Demonstration of the relevant reactions in high-school and undergraduate college laboratories would have value not only in illustrating environmentally friendly biotechnology for the utilization of renewable energy sources, such as cellulosic wastes, but could also be used to teach the principles of enzyme-catalyzed reactions. In the experimental protocol described here, it has been demonstrated that the common sugar glucose can be used to produce hydrogen using two enzymes, glucose dehydrogenase and hydrogenase. No sophisticated or expensive hydrogen detection equipment is required-only a redox dye, benzyl viologen, which turns purple when it is reduced. The color can be detected by a simple colorimeter. Furthermore, it is shown that the renewable resource cellulose, in its soluble derivative from carboxymethylcellulose, as well as aspen-wood waste, is also a source of hydrogen if the enzyme cellulase is included in the reaction mixture.

The other paper on which Portman is listed as the coauthor (again as Natalie Hershlag) was from 2001, and is titled, “Frontal Lobe Activation during Object Permanence: Data from Near-Infrared Spectroscopy.” It’s abstract says:

The ability to create and hold a mental schema of an object is one of the milestones in cognitive development. Developmental scientists have named the behavioral manifestation of this competence object permanence. Convergent evidence indicates that front lobe maturation plays a critical role in the display of object permanence, but methodological and ethical constrains have made it difficult to collect neurophysiological evidence from awake, behaving infants. Near-infrared spectroscopy provides a noninvasive assessment of changes in oxy and deoxyhemoglobin and total hemoglobin concentration within a prescribed region. The evidence described in this report reveals that the emergence of object permanence is related to an increase in hemoglobin concentration in frontal cortex.

For the full text you can head to the Harvard site where it is available for free in it’s entirety. It’s a truly fascinating read if you’re currently a geeky parent raising a geeky child and trying to observe when object permanence actually sets in. Just saying.

We applaud Portman and Disney for their effort to get more people involved in STEM fields. The more scientists and engineers there are in the world, the more interesting things we have to write about. Keep it up.

(via Disney/Marvel, Journal of Chemical Education, and Harvard, image via Disney)