Agents of SHIELD Recap: "A Hen in the Wolf House" | The Mary Sue

Agents of SHIELD Recap: “A Hen in the Wolf House” 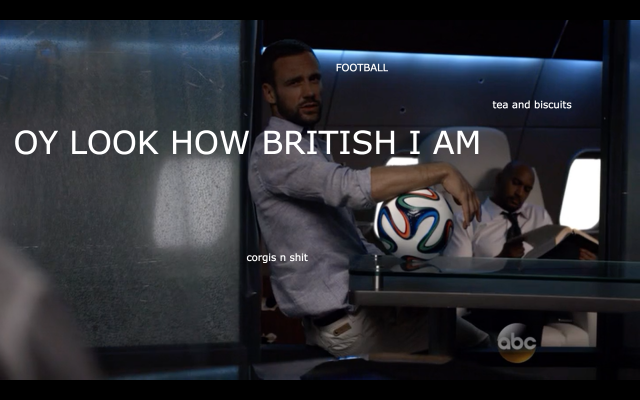 Though this episode obviously didn’t hold a candle to last week’s flawless May vs. May dance party perfection, it definitely held up to the level the season has been running with so far. We had some solid intrigue, a little action, and (of course) Fitz feels. Onwards with the review!

[This recap, as with all our recaps, contains spoilers for the episode, so fair warning.]

“A Hen in the Wolf House” brought to a close the Simmons-is-undercover-in-Hydra storyline with the introduction of Adrienne Palicki as Bobbi Morse. While I love that Simmons is back on the team and that we get another kick-ass female character in Morse, I did struggle a bit with her introduction in this episode. I definitely thought the undercover Hydra storyline could have lasted much longer than five episodes into the season—Simmons didn’t even get to do anything really juicy while she was there. Furthermore, everyone on the entire internet already knew Palicki was going to be playing SHIELD agent Bobbi Morse aka Mockingbird, so trying to get us to feel any sort of suspense by pretending she was a Hydra agent? Really didn’t work. Sorry guys. 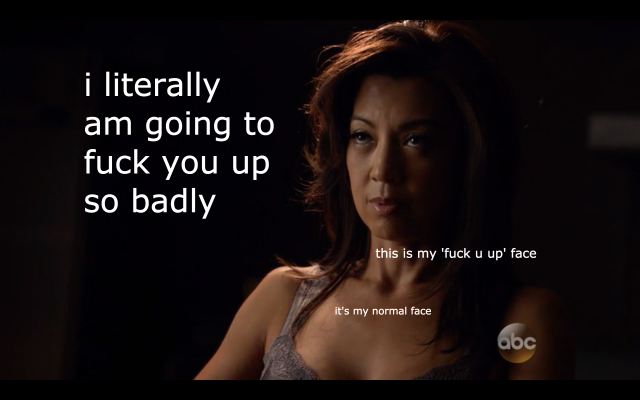 Moving forward, I hope we get to see a little more butt-bashing action from Palicki, who can definitely handle the fight scenes. But after last week’s action-heavy, Kevin Tancharoen-directed episode, it was clear that this week’s director had no idea what they were doing with Morse (the hair flip and smile? Can we not?). More Tancharoen plus more Palicki can only be a brutally deadly combo, and I want it. And I also want the character development we’re going to get from Hunter, having to deal with his infamous ex in the building all the time. 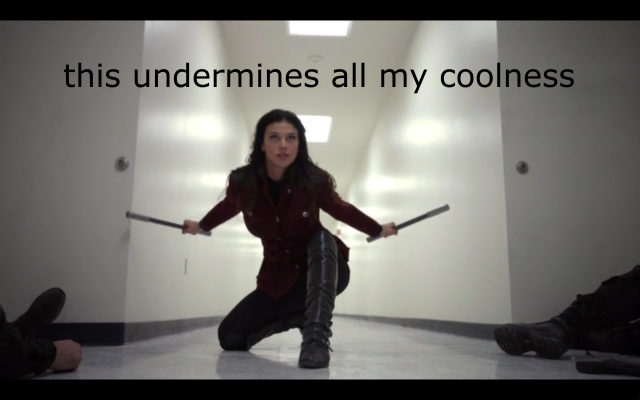 In female recurring characters that I equivocally love news, Raina is back and can I just say that wherever this girl is getting her dresses, I need them all. Now that she needs SHIELD’s help (funny how that always seems to happen), it will be interesting to see where the show goes with her character. Before the season started, I wanted to see Raina become the all-new Big Bad (because how often do we see huge bad guys like Raina, as opposed to the kinda-overdone Whitehall?). 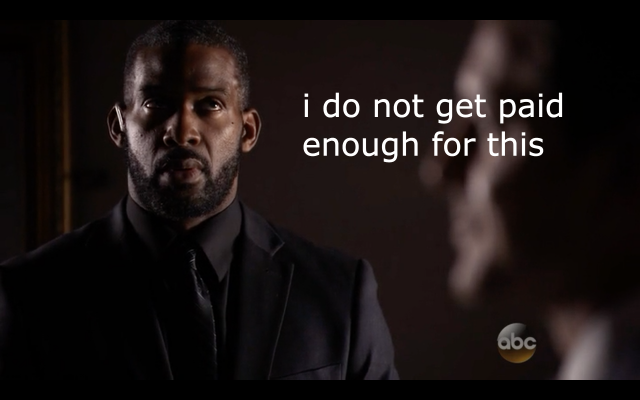 But now I’m thinking that she would be a pretty great addition to the SHIELD team itself. I mean, if we can’t have Lucy Lawless, we might as well get Raina on board, you know? Plus, Hunter is totally into her. 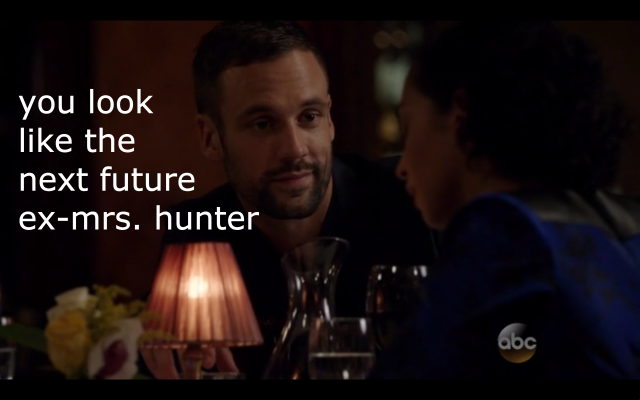 Raina definitely needs to stop working with Spy Daddy, because—in some definitive abusive relationship moments—we learn that he is some sort of evil!Hulk and is hell-bent on destroying everyone that calls him out on it. And now SHIELD, too, I guess, because Coulson is a way better Spy Daddy than Spy Daddy. 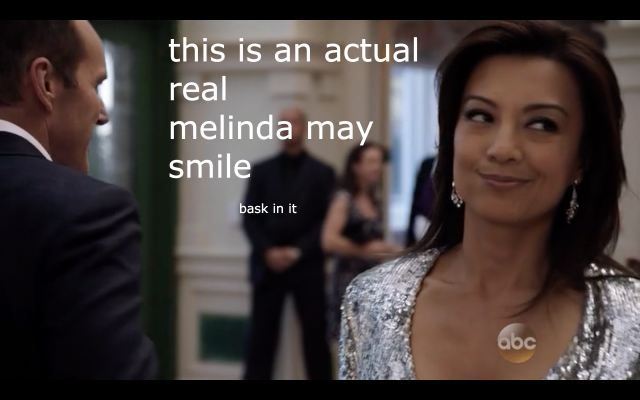 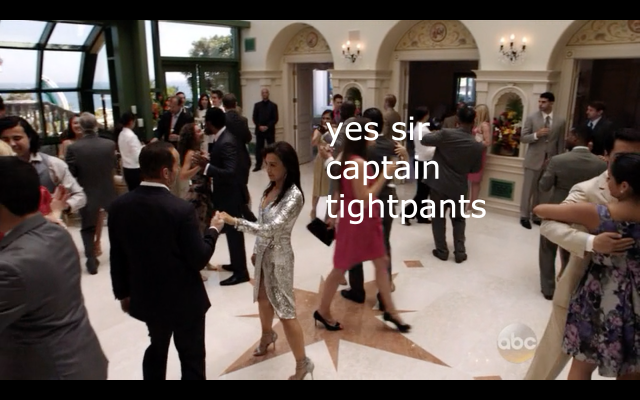 One of my all-time favorite moments this episode was when Fitz was seen admiring Mack’s macktacular bod—which was pretty definitely mirrored at the end of the episode with Simmons’s clear epic girl crush on Morse. Wouldn’t it be amazing if the show that never clarified that Hand and Hartley were in a same-sex relationship decided to make FitzSimmons bisexual? 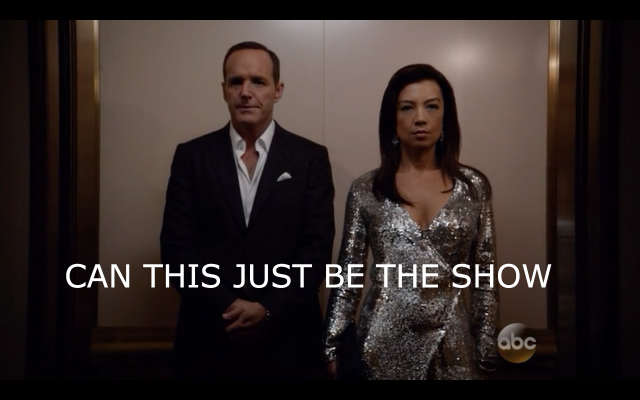 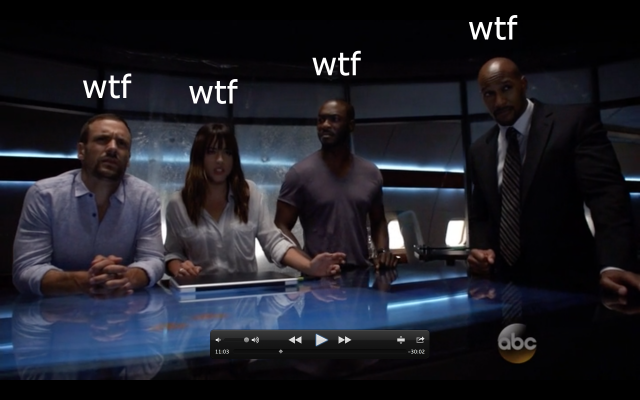 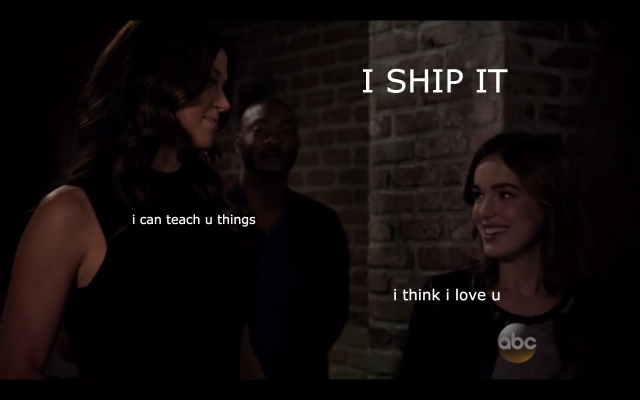 Season Two Skye, meanwhile, keeps playing with my emotions; half the time she’s the annoying know-it-all Skye from last year (“Tell me everything! I’m going to Spy Daddy’s secret hideout alone! I know best!”), but the rest of the time she’s actually showing signs of emotional maturity. The breakdown in Coulson’s arms was one of the most real, in-depth character moments I’ve seen from Skye ever—and she does have a theory about what’s going on with Coulson’s crazy drawings, so I can’t stay mad. 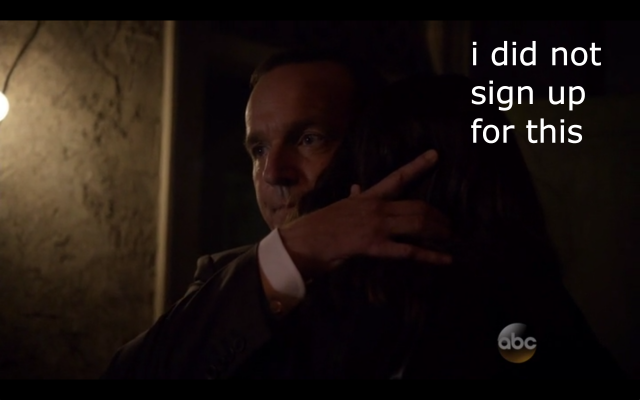 And Skye isn’t the only one theorizing about Coulson’s weird art. The internet is ablaze with theories all pretty much saying the same thing: Agents of SHIELD is setting up the Marvel Cinematic Universe for the Inhumans.

A little background jazz: there’s this alien species, the Kree—remember Ronan, from Guardians? He’s Kree—and they set up this base on Uranus a long time ago and started experimenting on humans. The result of their experiment was that a bunch of humans gained superpowers, and thus: the Inhumans.

The idea that Skye, Coulson, Garrett, et al., might be Inhumans works for the Marvel Universe for several reasons. On a purely business level, Marvel doesn’t own the movie rights to X-Men, so “mutants” are off the table entirely. The Inhumans would be a great way to introduce super-powered people to the Marvel jam. Also, we know that Marvel already has a movie script ready for) Inhumans, so that’s telling.

On top of that, we’ve seen those blue Kree pop up in several key episodes of SHIELD. The guy in the vat that made the special serum that saved Coulson and Skye? Definitely Kree. Weird blue thing in the box Peggy Carter slammed shut in the first episode of season two? Kree-town. Quicksilver and Scarlet Witch, in Ultron might be Inhumans (since they can’t very well be mutants, I guess). And perhaps most interestingly, CBR points out that the logo for the current run of the Inhumans comic looks strikingly familiar. Do you see it? 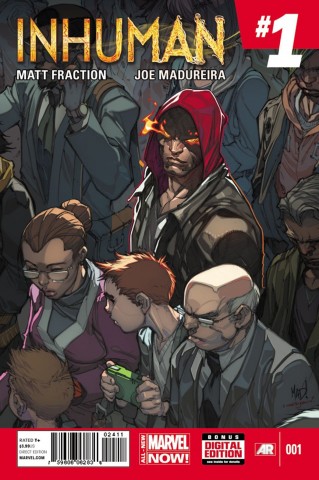 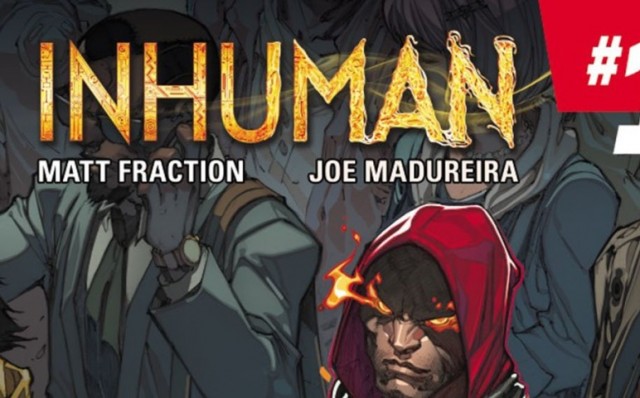 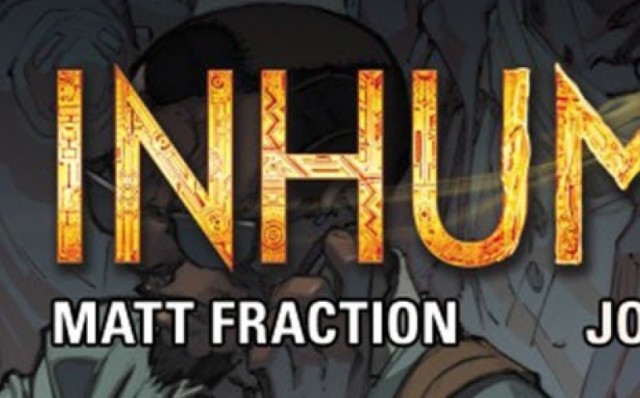