Agents of SHIELD Recap: “I Will Face My Enemy”

Can every episode of this show just be this episode? 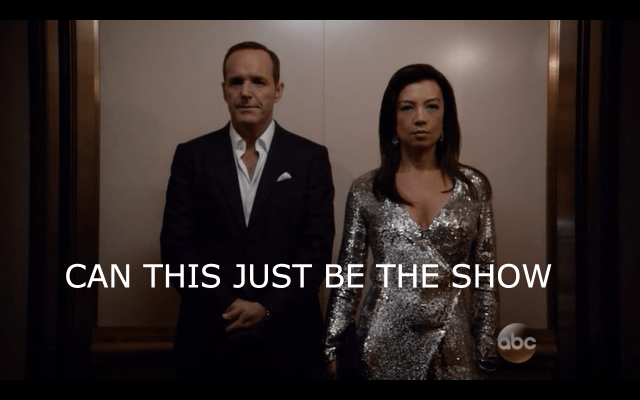 “I Will Face My Enemy” is my all-time favorite episode of Agents of SHIELD. And I’m not just saying that because I saw it in a giant room at NYCC with tons of other SHIELD fans. It was a legitimately great episode that all other episodes of SHIELD should aspire to emulate.

[This recap, as with all our recaps, contains spoilers for the episode, so fair warning. ] 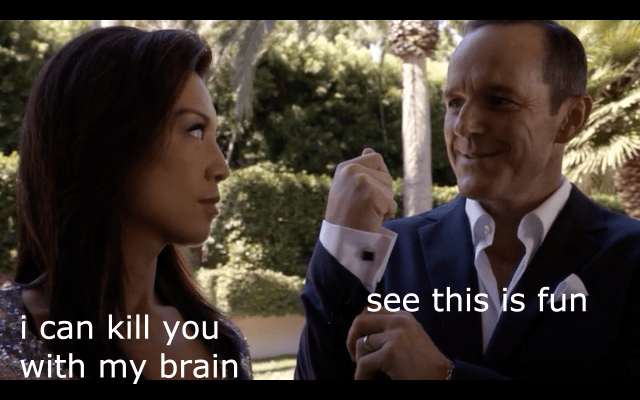 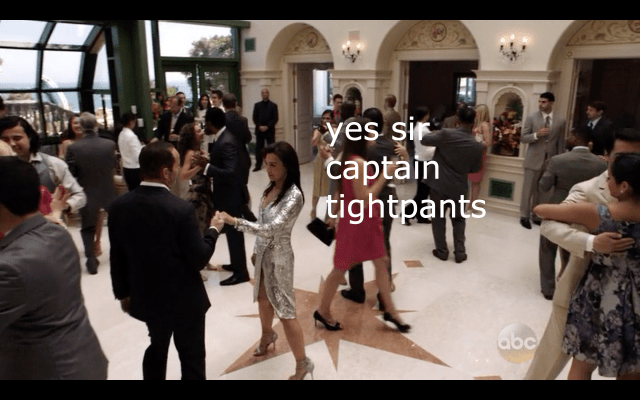 So I was at NYCC this past weekend, and had the opportunity to attend the Agents of SHIELD panel, where this episode was introduced to the crowd by Jeph Loeb and Coulson himself, Clark Gregg. They were as charming and lovely as you’d expect, and they watched the episode from backstage—which they found extremely gratifying, as the panel crowd cheered and laughed through the entirety of “I Will Face My Enemy.” 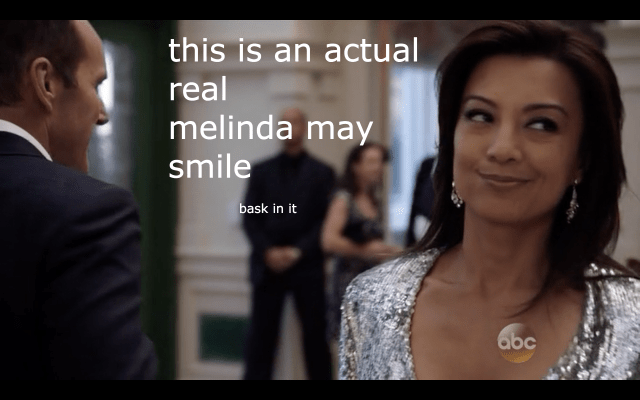 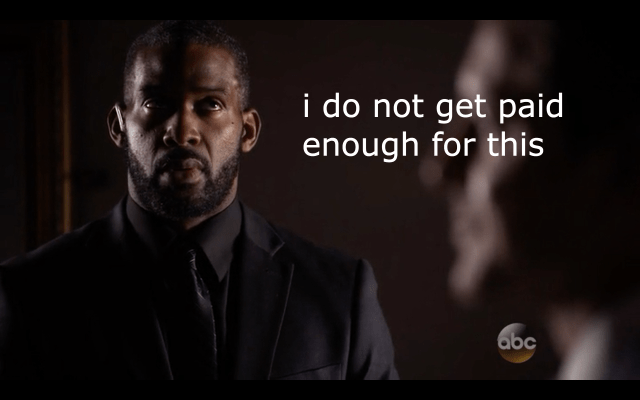 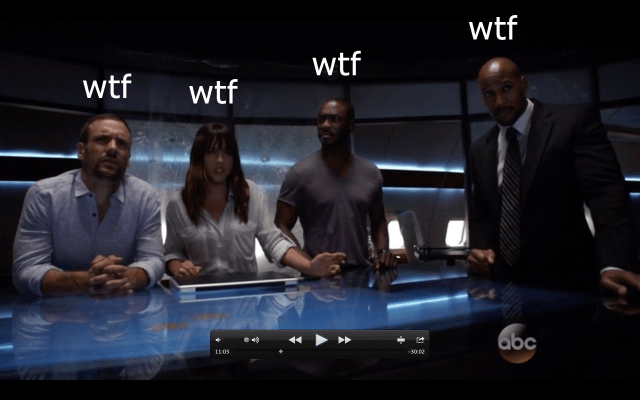 This episode is, in my opinion, everything an episode of Agents of SHIELD should be. A little lighthearted; a little funny; a lot kick-ass; self-referential without being too cliché; and just Joss-y enough in its dialogue to remind us all that the show we’re watching is actually supposed to be part of the greater Whedon pantheon.

It doesn’t surprise me to learn that, in an hour that reminded me a whole heck of a lot of Firefly‘s “Shindig,” that “I Will Face My Enemy” was written by Drew Greenberg (who you may previously recognize from a whack of Buffy episodes and the Firefly episode “Safe”—you know, the one where River dances and there’s cows). We also have a new director to SHIELD in this episode in the form of Kevin Tancharoen (brother of executive producer and showrunner Maurissa Tancharoen), and his fresh perspective was extremely gratifying. The Mortal Kombat director brought a great look (slow-mos and three-sixties included) to the episode’s incredible fight sequences – the best on the show to date, in my opinion. 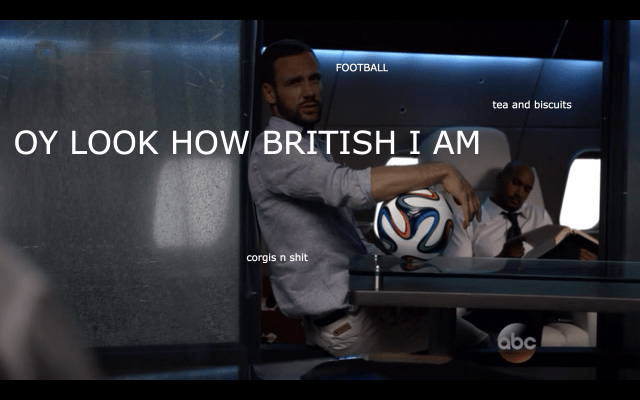 What I particularly loved about “Face My Enemy” was that it was all about the characters. In a show where I haven’t always been 100% sure why I should care about literally anyone on the bus at any given moment, this season has done a lot to increase my empathy level for the Agents, and this episode in particular really, really helped with that. It was all May and Coulson all the time (which, more of that, please?), in lots of different and unexpected ways.

Sure, we got to see Coulson in charge and May kicking butt (and hell yes did she kick some butt), but we also got fantastic humor in the form of May’s laughter and flirtatiousness, and Coulson being out in the field (when will we ever see Clark Gregg punch someone after saying “YO!” ever again?). Personally, I think (whether you ship them or not) May and Coulson are the two best characters on the show, and I loved finally getting a glimpse beyond their surface personality traits. 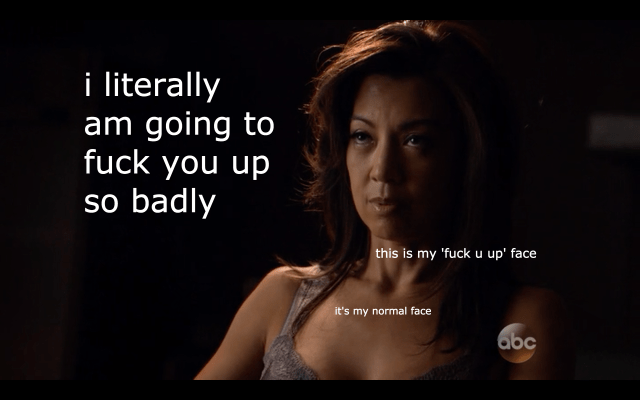 We also got some great team bonding moments between Skye, Fitz, Tripp, Mack, and Hunter. “Face My Enemy” was blissfully low on Skye (who still remains my least favorite character, despite her ostensibly being the audience proxy), though she did get an awesome moment on the beach looking cute on a vespa, instead of in a bikini. Thanks, writers! There’s nothing like great team development, and forcing the secondary gang to work together to stop the bus from exploding was some good ol’ fashioned rallying. On an individual level, we got to learn a little bit more about Hunter, and we even got a great step forward for Fitz, who might actually find himself moving on from Simmons. Is that… is that real, actual character development? Fitz is evolving! 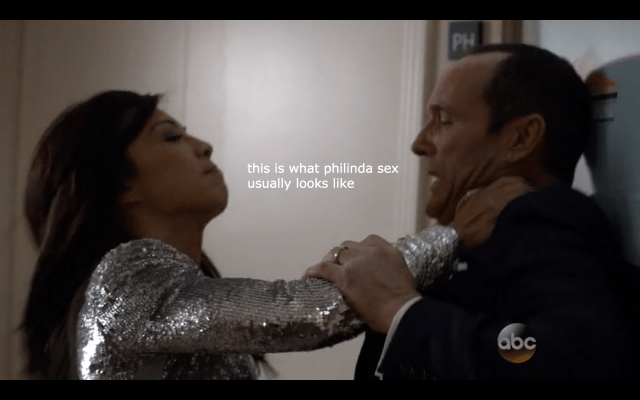 “Face My Enemy” also made great use of the multiple reveals trick (Talbot is Hydra! Talbot isn’t even Talbot!); some excellent references (“Laser grids. Why is it always laser grids?”); and benefitted from the complete lack of a super villain. The episode confirms what I’ve always thought about SHIELD: the show works best when it’s a little light; when it focuses on the development of the main characters; and when it’s about real people doing real things to battle real folks. 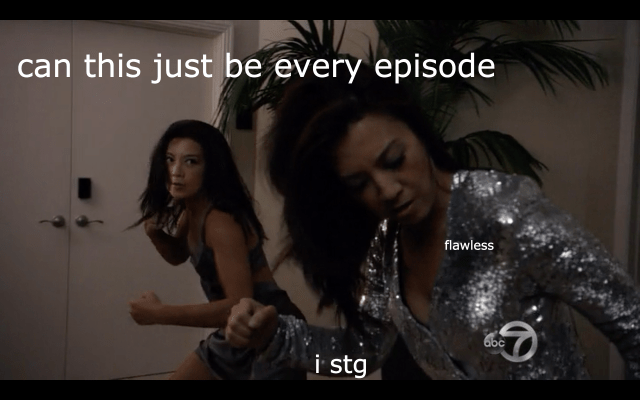 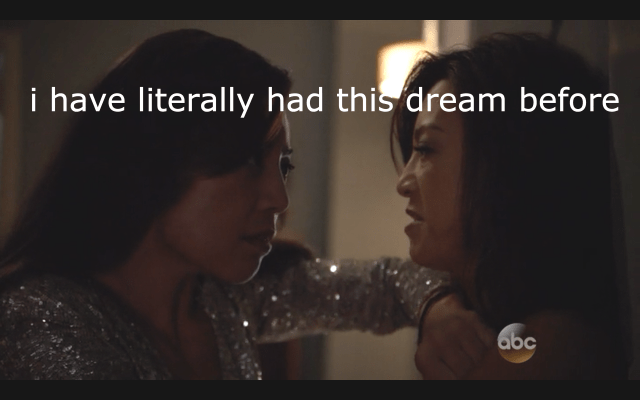