So Did Vin Diesel Just Spill The Beans On Marvel’s Plans For An Inhumans Movie Or Nah?

"I am Black Bolt" doesn't quite have the same ring to it. 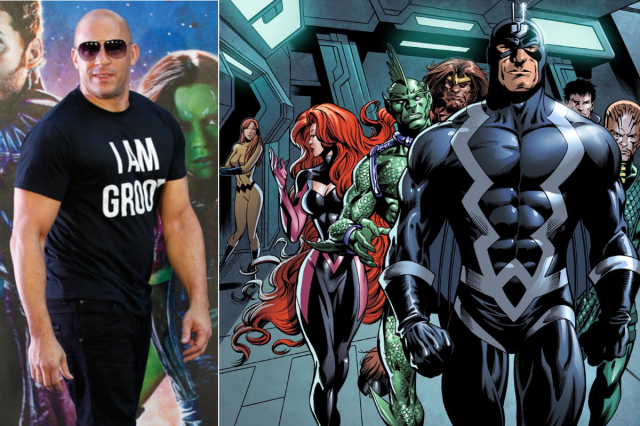 Vin Diesel obviously loved playing Groot in Guardians of the Galaxy (as evidenced by his penchant for excellent t-shirts and stilts) – but could it be that the humanoid tree isn’t the only MCU role we’ll see Diesel in? A new post on the actor’s Facebook wall seems to suggest that he might be up for a part in a future Inhumans movie.

Last night, Diesel posted this to his Facebook wall (where he has 82 million followers):

For those of you who haven’t heard of the Inhumans – and, don’t worry, they’re not super mainstream, so it’s cool – their story goes a little like this. There’s this alien species, the Kree – remember Ronan, from Guardians? He’s Kree – and they’re at war with this other alien species, the shapeshifting Skrulls. The Kree set up this base on Uranus thousands of years ago, and decided to experiment on some Cro-Magnon humans. The result is a bunch of humans with superpowers (convenient, since Marvel doesn’t own the film rights to the X-Men, no?) The Kree abandon the Inhumans, they form their own society, hijinks ensue, etc.

Diesel has previously stated in interviews that – before receiving the additional offer to play Groot in Guardians – he was originally approached by Marvel for a Phase 3 movie that wouldn’t be released until 2017. It’s been speculated for months that Marvel has an Inhumans movie in the works, and since Kevin Feige has stated that Diesel could play a live-action role in a future Marvel film, this might not be too far off the mark. Especially if – as widely speculated – Diesel were to play Black Bolt, who doesn’t speak, there would be no chance of movie-goers mistaking him for Groot.

Now that Marvel knows an ensemble film about an obscure band of space heroes can be successful, I don’t think an Inhumans film would be completely out of the question. Plus, I kind of love Diesel’s enthusiasm for the Marvel Cinematic Universe. Let’s do it. I’d watch a Lee Pace vs. Vin Diesel show-down any day.

Guardians of the GalaxyInhumansMarvel Entertainment