Everything About This S.H.I.E.L.D/Secret Hydra Ring Is Horribly Misguided 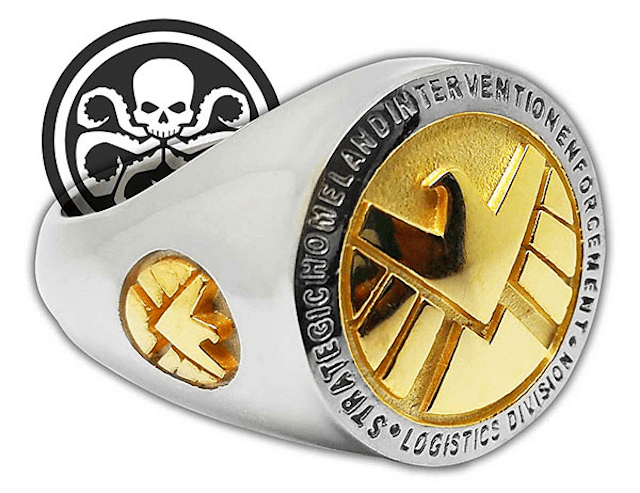 There’s nothing in life that I love so much as geeky jewelry, especially of the Marvel variety, so I’m sad to say the creation of this S.H.I.E.L.D. ring that can be slipped off to show your hidden Hydra affiliation is an awful idea and I don’t know how it got approved.

No matter where you stand on the Hydra Captain America debacle (and I believe that the correct place to stand is on the side of DON’T MAKE STEVE ROGERS A NAZI AND THEN NOT ENGAGE YOUR COMMUNITY ABOUT IT), I believe we can all acknowledge that Marvel hasn’t handled the situation with grace. They’ve been tone-deaf to fan concerns and made matters worse with initiatives like suggesting that comic store staff dress up in Hydra t-shirts and other Hydra-themed promotions for Nick Spencer’s Secret Empire. Now there’s an official Marvel-licensed Hydra secret agent ring—”S.H.I.E.L.D on the outside, Hydra on the inside.” And it can be yours, for the low, low cost of $244.99.

Listen, you can tell me that I’m overreacting here and I’ll hear you out. But when I saw the ThinkGeek description for this ring go by in my feed my brain went OH HELL, NO. 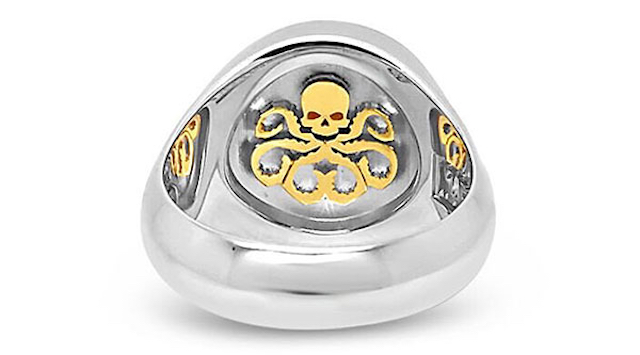 The ring is a chunky, flashy thing of sterling silver with gold overlay and the traditional S.H.I.E.L.D. logo on the front. Take it off, and on the inside of the ring lurks the Hydra (Red) skull octopus. This is how you can show that “you’re also a proud member of a shadowy organization bent on world domination,” ThinkGeek’s copy enthuses. Just what I always wanted to worry about other people wearing concealed in their attire.

This isn’t all just fun and fandom; for many the symbol of Hydra represents the hatred and embrace of fascism the organization continues to embody in the Marvel universe:

We’ve also been asked to change our store logos to Hydra symbols. My staff are LGBTQ, Jewish, or both. We are no longer hand-selling Marvel. https://t.co/gQnBfBZC8L

As our Jessica Lachenal noted in writing about the current season of Agents of S.H.I.E.L.D., there’s little doubt what Hydra represents to this day:

Simmons asks, “Are you sure?” The kid replies, “Are Hydra all Nazis?” almost sounding like the rhetorical “Does a bear poop in the woods?” question.

Simmons answers, “Every last one of them. And don’t you let anyone forget it.”

The idea of a ring with a secret affiliation is rad as hell to those of us who like sneaky things and had a poison ring aesthetic in high school. I’ve long declared that I want a “fandom decoder ring” that you could use to recognize fellow fans on the street. But you know what I don’t want to align myself with? Nazis and terrorists, fictional or otherwise.

“Now when you’re greeting other double-agents, you don’t have to do the obvious hug-and-a-“Hail” maneuver – just slip off your ring and flash them a hint of tentacle!” Yeah, great. Great. Cool.

And even if you just want this ring for cosplaying Grant Ward or as a collectible, its super high price point is, well, super high. “Just give other agents the finger!” crows the copy. I’m giving one to this whole concept.