Many of us found Marvel executive David Gabriel’s comments about diverse characters being the cause of falling sales particularly infuriating and dumbfounding, because readers are tired of expensive and disappointing events—and oh yeah CAPTAIN AMERICA BEING A GODDAMNED NAZI.

With the latest Secret Empire supposition that our beloved fighter against fascism Steve Rogers has always been a villain, the Internet wasn’t about to sit down and take that one quietly.

Marvel: captain america feasts on the still-beating hearts of babies

Marvel: whoa, look at this backlash against diversity

The creators of the new Cap comics—particularly writer Nick Spencer, who saw the widespread reaction to his Hydra Cap issues and decided to double down—can’t dodge this one. Captain America, created by Jews in a time before the US had joined World War II (but lots of European Jews were already suffering), punched Hitler smack in the face in his iconic first cover. Cap has history that matters.

A superhero that has stood for seventy years as a bulwark against fascism and as an adherent of truth and justice (even siding against America when it has messed up) is imbued with more symbolic power than the Secret Empire creatives want to acknowledge.

@TomatoGrandpa “Is this a commentary on the rise of fascism in America?” Nick: “no, we have to listen to both sides, also here are some supervillain SJWs”

This reader speaks for us all and perfectly summarizes my emotions where Steve Rogers is concerned:

Too true. Too true.

Dear @Marvel – America is doing a good enough job punching outselves in the face without you screwing with #CaptainAmerica. #weneedheroes

“Thanks for turning Captain America into a Nazi, Marvel.” -Nazis

And over on Facebook, some Marvel writers were already generating their own creative solutions to the problem. I approved. Make love, not fascism, amiright? 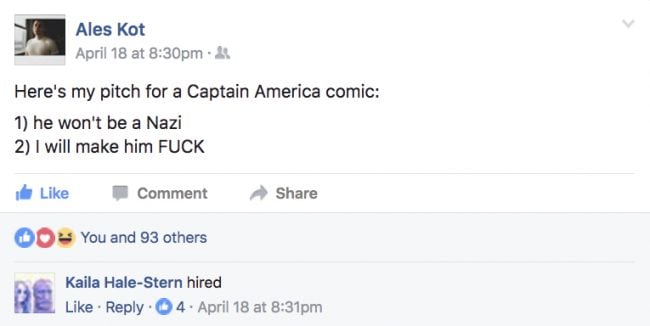 Reporters who cover this stuff for a living are as pissed off as fans are. Because 9 times out of 10 we are such massive fangirls and fanboys and fanpeople that we somehow managed to turn it into a career.

EVERYTHING IS TERRIBLE IN COMICS AND EVERYTHING HURTS.

Get your shit together, Marvel. This is why readers are ignoring you.

@cinematog_raphy when you forget they made captain america a raging nazi and wonder why they are treating their characters of color like garbage pic.twitter.com/7D7E9Ijfs4

People. PEOPLE. Hellboy and Hercules Mulligan are ready to team up with Captain America. This writes itself!!! pic.twitter.com/ZJ7hF2WWPt

Captain America, Hellboy, and Hercules Mulligan team-up to go after Nazis? There’s a comic I would read, like, yesterday. And for a brief moment of time while I considered this, everything was beautiful and there was no pain.