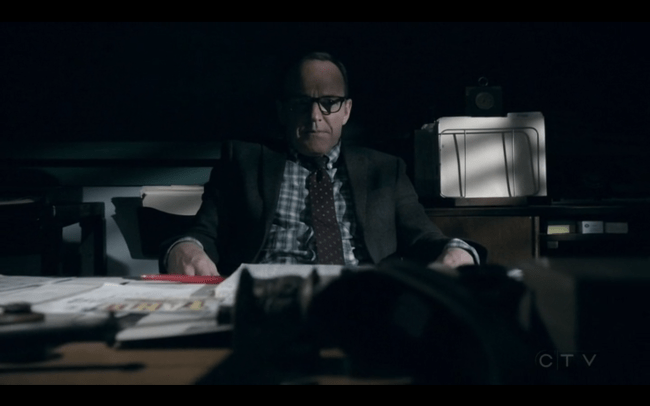 What. What. Okay, I don’t know if it’s something going around the water supply in Hollywood or what, but between Legends of Tomorrow‘s “Doomworld” and this bad-guys-win arc of Agents of S.H.I.E.L.D., television seems to be caught up in some sort of weird alternate reality plot epidemic.

Not that that’s a bad thing, because it’s been pretty neat, and this episode of AoS (which we should call Agents of H.Y.D.R.A. for now, I suppose), certainly was a mind-bending one. Let’s jump to it, shall we?

Picking up where the last arc left off, we’re back in Daisy’s apartment where she wakes up Ward, thinking he’s Lincoln. She tries to use her Quake powers after realizing it’s him, but nothing happens. What’s extra weird is that he calls her Skye, as if her whole Inhuman arc never really happened. Of course, Inhumans did kind of happen anyway, as we follow both Daisy and Ward, who are headed to the Triskelion, now done up in big ol’ Hydra fashion. It’s kind of a surreal movie mashup moment seeing the massive building still standing in D.C., really.

Speaking of surreal, it’s kind of weird watching Ward carrying on like nothing happened. I mean, the last time we saw the guy, he was a walking, talking corpse filled with bugs and what looked like the Mummy out of The Mummy.

Daisy takes a moment at her desk to look up what happened to everyone: Lincoln’s still dead, though this time as a result of “testing,” and Simmons? Oh, remember last episode when we saw Simmons’ grave? Yeah, turns out, she actually was dead. She was working at S.H.I.E.L.D.’s Academy of Science and Technology, but she was killed along with 200 other agents. The cover story is that a lab accident claimed their lives, but after Simmons literally digs her way out of a mass grave (yikes), she sees she was shot twice in the heart.

Agent May—at least, a much more harsh version of her—ends up interrupting Daisy’s search. Daisy tries to get her to realize she’s in the Framework, but, alas, that would be too easy. May’s not buying it, and Daisy ends up having to play Hydra Agent for a while.

Simmons, meanwhile, seems to be having trouble with “integrating” into the Framework, so to speak, as she keeps calling things lifelike and refers to people as bits of code. It’s … odd, but then again, Simmons is basically the walking undead in this world. After subduing two Hydra agents at a coffee shop, Simmons is able to look up Coulson, who’s now an anti-Inhuman high school teacher. He’s giving a lecture about “the Cambridge incident,” which we’ll dive into in a second.

His lesson is interrupted as Hydra agents come in to take one of his students away “for testing.” It’s, again, kind of a weird moment to watch Coulson stand by as a kid is whisked away under mysterious circumstances. It’s not like Coulson looks any different or anything, except for his maybe much more professor-like wardrobe, so watching it all happen while knowing he can do something about it makes the whole scene that much more unsettling.

Speaking of unsettling, Ward and Daisy end up taking point on interrogating none other than Vijay Nadeer. You’ll remember a few episodes back, he was killed in the real world by his anti-Inhuman senator sister, Senator Nadeer. Here, though, he’s alive and well—okay, as well as well can be when you’re being tortured by Nazi scientists. Daisy knows he’s actually Vijay, but here he’s going by a cover name with a counterfeit Hydra ID. She mentions that, and Vijay starts to crack. Daisy asks who the mole in Hydra is who gave him his ID, but he’s interrupted from answering when Ward punches him right in the face, knocking him out. Wow, dude.

Again, super weird to watch Daisy and Ward settle back into being partners for a bit. Their dynamic felt almost like it was way back when Ward was still with S.H.I.E.L.D., and it’s just super surreal to see it here again.

Agent May steps in and is about to shoot him, but Daisy bargains with her and says that he’s got more to say. May reluctantly agrees, and orders him to be taken up to “The Doctor” for testing. Vijay seems super scared at that point, and promises to talk as long as they don’t take him up there. En route to the elevator, though, Daisy tries to talk with Vijay and tell him that she can get him out. He tricks her and ends up making a break for it, but he’s subdued by two guards who were escorting none other than “The Doctor”—who, you might have guessed, is actually Fitz.

Okay, I was (maybe half) wrong about calling Fitz some rich techie millionaire playboy type when we saw his Framework preview. Here, he’s basically a ding dang Nazi doctor, all cold and ruthless and uncaring. It’s chilling to watch Fitz be so cold, and really, I didn’t like the Framework world before, but now I extra super hate it. Poor, sweet Fitz.

Simmons, meanwhile, makes contact with Coulson, who has a tough time listening to anything she has to say. Let’s be honest, if anyone walked into a classroom looking like a bag lady like Simmons did, we’d all be having a bit of trouble trying to make sense of anything they said, too. But in her rant, she notices that there’s a Hawaiian dancing doll on Coulson’s shelf in the classroom. Simmons shows it to Coulson and mentions Tahiti, calling it “a magical place.” You’ll remember from way, way, way back in Season 1 that this phrase served as a trigger for Coulson’s re-written memory, which was edited to make him forget about dying during the events of The Avengers.

The phrase sticks a bit here, and Coulson is taken aback. Simmons says she believes it’s his subconscious fighting back against the Framework. Ultimately, though, Coulson ends up kicking her out of the classroom, and even goes as far as to call in a report on her.

Outside, Simmons finds that the car she stole from the two Hydra agents from earlier was being tagged by one of Coulson’s students. The tag reads, “Hydra Lies,” and the kid—who is friends with the other kid who was taken away—is staunchly anti-Hydra. He thinks Simmons is a Hydra agent, which she pretty vehemently rejects. The kid feels bad and loans Simmons his car.

I bring this up mostly because of the exchange that happens next. He hands Simmons his keys, and Simmons asks, “Are you sure?” The kid replies, “Are Hydra all Nazis?” almost sounding like the rhetorical “Does a bear poop in the woods?” question.

Simmons answers, “Every last one of them. And don’t you let anyone forget it.”

Simmons leaves to pick up the “back door” she programmed into the Framework, which would allow them to escape if they needed to.

Back at Hydra, Fitz is running “tests” on Vijay. Apparently he’s invented a machine that allows them to test to find out what an Inhuman’s powers are without exposing them to Terrigenesis. It hurts like hell, and can end up killing the subject, but that’s fine with Hydra, of course. Agent May comes in with the report about Simmons, and Daisy’s there to overhear their conversation about it. She ends up leaving to see if she can find her.

They end up linking up at the park where Simmons hid the back door switch. Unfortunately as they’re about to leave, Ward interrupts them, holding them at gunpoint. He’s asking Daisy if Simmons is her contact in the Resistance. Daisy keeps yelling that she’s not, and Simmons, bless her heart, is just so confused by the fact that Ward is standing and living and breathing (kinda) right in front of her. She totally calls him a psycho stalker killer, and honestly, good for you, Simmons, calling it like it is even when he’s got a gun pointed at you. I knew you were totally ride-or-die.

As Hydra agents close in, Ward makes a pretty stunning move that I know I didn’t expect: he ends up shooting and killing a Hydra agent. He’s with the Resistance, and he helps Daisy and Simmons escape. Apparently no matter who’s in charge, Ward is always a double agent. Interesting, that. What’s more, he was the mole within Hydra who gave Vijay his ID—hence why he punched him out during the interrogation.

He drops Daisy and Simmons off at Daisy’s apartment, and after a bit of discussion, the two agents decide that they should probably leave the Framework to regroup. Unfortunately for them, the backdoor doesn’t work anymore. They’re stuck.

Back at Hydra, The Doctor—err, I mean Fitz, isn’t too happy about them getting away. He asks to see the surveillance footage the drones captured of Simmons, but Agent May mentions that it had been forwarded to the Director already. Fitz goes upstairs to speak with the director, and … well …

… as it turns out, the director of the Framework Hydra is Aida, who took out Simmons’ escape route. What’s more, Fitz seems utterly dedicated to protecting Aida (which parallels neatly with his obsession in helping bring her to life alongside Radcliffe)—all because he’s apparently coupled up with her. They share a kiss, and wow, I really have to give it up to Aida for being such a dastardly mastermind. She doesn’t let Fitz view the footage of Simmons. My guess is that seeing her might be the trigger that unravels the Framework for Fitz.

Speaking of unravelling the Framework, Coulson is hanging out in his classroom when he pulls out a file full of clippings and random ephemera. At least, they seem random, until the camera zooms in a bit showing what’s on each bit. One has a calendar with his car, Lola on it, another news clipping mentions an L.A. quake, his old S.H.I.E.L.D. partner Felix Blake makes an appearance in a clipping, so does Doctor Winslow (Calvin Zabo, a.k.a. Daisy’s dad), plus some doodles of the S.H.I.E.L.D. eagle/logo.

Underneath that all, though, is a postcard from Tahiti, which sits atop a bunch of repeated handwritten lines that say “It’s a magical place.” Come on, Coulson, remember!

In the post-credits scene, Daisy’s hiding out in Coulson’s backseat as he’s about to drive home. She asks him to try to remember, but Coulson says he can’t remember anything. Daisy says that he’s the one she’d turn to when things get heavy, because Coulson was always the closest thing she had to family. After a few moments of hesitation, Coulson looks at Daisy in the rear view mirror and says, “… Daisy?”