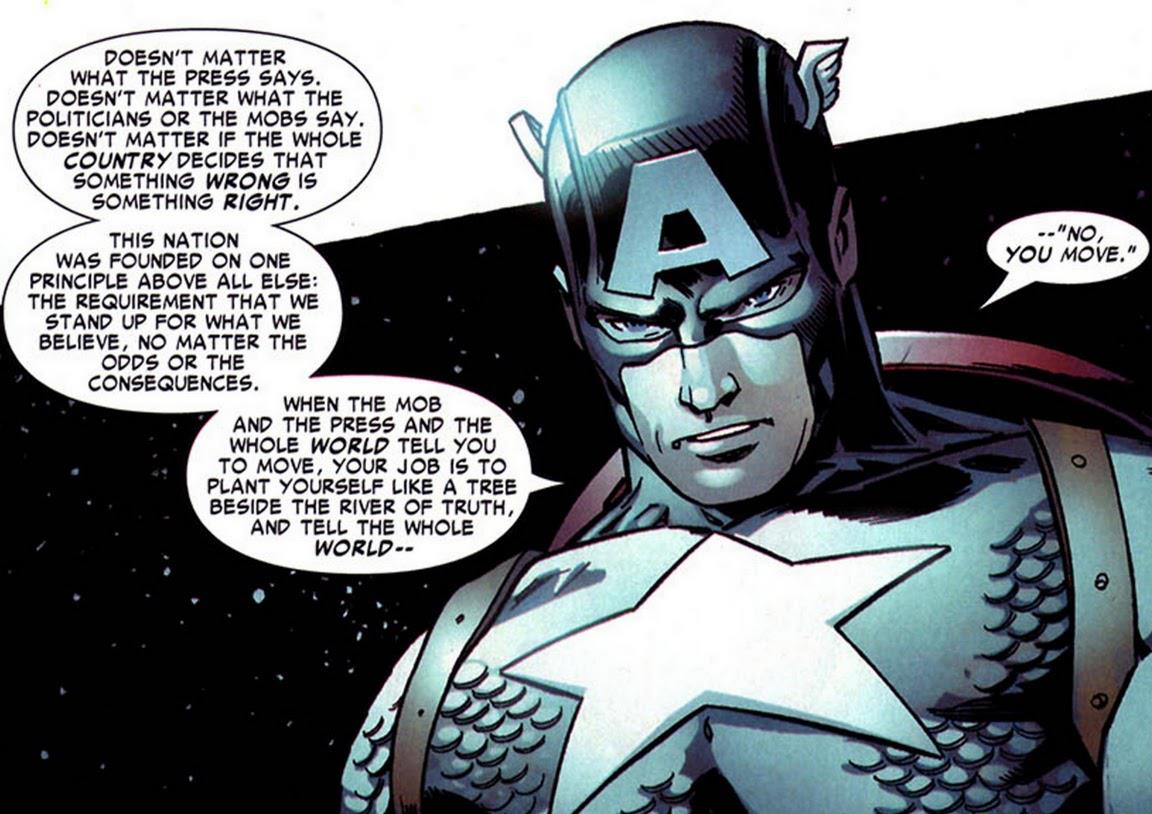 Oh hey, it turns out that Marvel Comics has heard about the massive blowback to the Psych!-Captain-America-was-always-Hydra concept and now they think we should just twiddle our thumbs and trust them. Hmmm.

Marvel has been pretty silent and let Steve Rogers and Secret Empire writer Nick Spencer tread his own social media water with regards to the ongoing Cap controversy, which he’s done while sometimes splashing concerned fans in the face. But the comics behemoth has continued with its questionable marketing tactics, like suggesting that comic store employees wear pro-Hydra shirts to tout the event. This resulted in additional anger at the insensitivity of asking people to wear and promote the symbols of an organization that was established as Marvel’s in-universe Nazis.

We’ve also been asked to change our store logos to Hydra symbols. My staff are LGBTQ, Jewish, or both. We are no longer hand-selling Marvel. https://t.co/gQnBfBZC8L

At last, however, Marvel has seen fit to speak to its upset and wounded fanbase. Psych! Of course they didn’t. In a formal statement to ABC News, Marvel said in sterilized PR-speak:

With Marvel Comics’ ‘Secret Empire,’ the forces of Hydra have taken over and, due to the villainous actions of the Red Skull, have manipulated Marvel’s greatest hero, Captain America, and forced him to adopt their cause. At Marvel, we want to assure all of our fans that we hear your concerns about aligning Captain America with Hydra and we politely ask you to allow the story to unfold before coming to any conclusion. …

What you will see at the end of this journey is that his heart and soul — his core values, not his muscle or his shield — are what save the day against Hydra and will further prove that our heroes will always stand against oppression and show that good will always triumph over evil.

Oookay. So now, I guess, Captain America wasn’t always Hydra, as Secret Empire doubled down on Spencer’s previous Hydra Cap efforts and asserted? And if good will win out and he will defeat Hydra and he’s not and never has been Hydra WHY THE HELL HAVE YOU TORTURED AND TORMENTED FANS WITH THIS PLOTLINE? I’m almost angrier at Marvel for the backpedaling statement, which basically seeks to retcon the whole controversy. Even if everything is tied up in a perfectly plotted bow with Steve burning Hydra to the ground, it won’t make up for the year+ we’ve had to think of him as a goddamned Nazi.

Sure, we’re going to “wait and see” what happens—we have little other choice. But that doesn’t negate the wrongness of the decisions in the first place, or the pain it has caused to fans and the anger it continues to generate. For an in-depth examination of why this means so much to many of us, this moving essay from Aliza Weinberger in Mashable breaks down Cap’s history as a Nazi-fighter and the creation of two Jewish men. “History is important,” Weinberger reminds us. “It tells us where we come from, informs where we’re going, and if we ignore it then we’re doomed to repeat its mistakes.” To disrespect Cap’s origins for a cash-grab event is callous and calculated on Marvel’s behalf. Period.

No matter how many formal statements to the contrary they release, Marvel goes on sounding tone-deaf. They refuse to grapple with the matter directly or civilly with their audience. Just check out their tweet from today—every single reply is worth reading. Fans feel betrayed, and Marvel continues to not get it:

Reeling from the betrayal of Steve Rogers? Enjoy Cap with the Invaders in better times in this: https://t.co/IIgMPPgr4z

@Marvel Isn’t the premise of the event that Cap was secret Hydra all along? How are we supposed to enjoy any of the better times if that’s the case?

And on and on and on. Marvel shouldn’t be surprised, really. After all, our Steve Rogers told us to stick to our guns, even if “the whole country decides that something wrong is something right.” So we’ll plant ourselves right here beside this river of truth. We’re not moving.