The Sharpie Liquid Pencil: You Can Erase It for Three Days, Then It’s Permanent 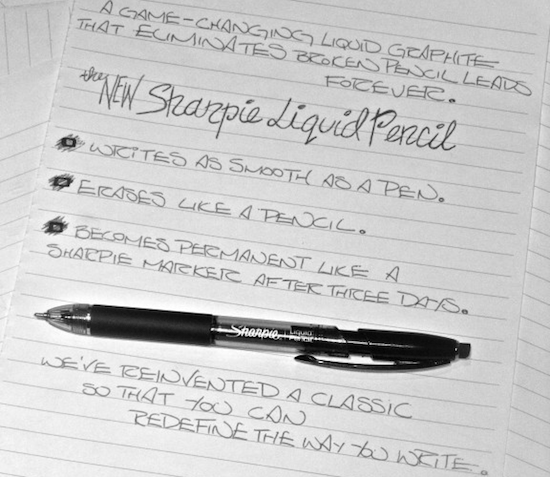 Sharpie’s official blog, which you just now learned existed, must be having its biggest week ever: Recently, it cryptically introduced the new Sharpie Liquid Pencil (above), and people are pumped. The pencil’s trick is that it writes with liquid graphite, which is perfectly erasable for three days, just like pencil lead, but which thereafter becomes permanent.

For such a paleo- form of tech, people seem excited about the liquid pencil, so far as we’ve gleaned by lurking the comment threads of other sites which have covered it. And I think that’s instructive:

While gadgetheads fawn over overclocked things that go pew-pew and Internet denizens tend to scoff at anything in meatspace, much less things involving pen and paper, those incremental steps up in the boring and the familiar ultimately do a lot more to measurably change and improve our lives than the whizzbangs of the week. As Tim Carmody, who brought the pen to Wired’s attention, wrote, “the Sharpie liquid pencil shows that somewhere, engineers are always quietly perfecting something old & great.”

The liquid pencil will be available in stores in September, just in time for back-to-school shopping; Wired noticed that one version is already for sale at Office Depot’s website for five dollars for a pack of two pens and six erasers. The Office Depot page says that the pen uses a #2 lead equivalent, perfect for standardized test-takers; curiously enough, however, it says that the pen becomes permanent after just 24 hours.