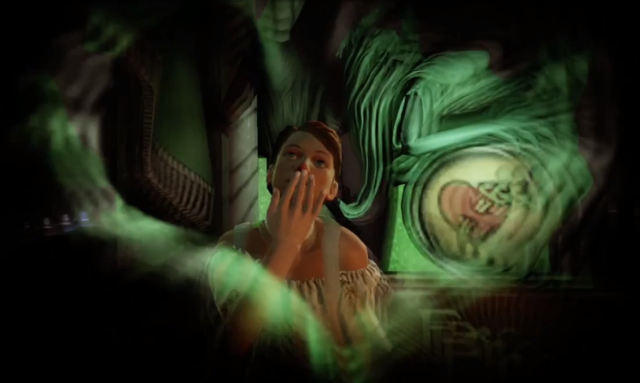 Act 3, Scene 2 of Shakespeare’s Romeo and Juliet has a soliloquy by Juliet as she waits for night to fall so she can see Romeo. It’s right before she finds out Romeo has been banished. The bit is rather beautiful, but if you want to hear a creepy, terrifying version of it, just go play BioShock Infinite. It’s hidden in the game along with some other audio surprises.

The whole speech isn’t in the game, at least not that we know of, but Joystiq pointed out a YouTube video that breaks down the creepy whispering when using the game’s Possession Vigor and reveals it to be the quote, “Come, gentle night, come, loving, black-brow’d night. Give me my Romeo; and, when he shall die, take him and cut him out in little stars,” played backwards.

Take a look at the video:

It seems the BioShock team hid a few easter eggs in the audio of the game, including a song slowed down so much it comes across as just an ominous drone through certain levels, but that when sped up, is kind of lovely. Take a listen:

This was discovered by GamesRadar earlier this month as well, but they only sped the audio up to 800%, which resulted in what sounded like a man singing. Another video posted by user cakechievables plays the audio at 1000% speed. It’s clearly a woman singing, and she’s a little easier to understand, though we’re not 100% sure what she’s saying. It sounds like there are two tracks laid on top of each other, and the best consensus we can find online is that the lyrics are “Time for me to drown to live,” and, “Time will finally catch up to me.”

Has anyone found other audio treats hidden in the game?