Sea Lion Rocks to the Beat, Proves We’re Not the Only Species Who Can Dance [Video] 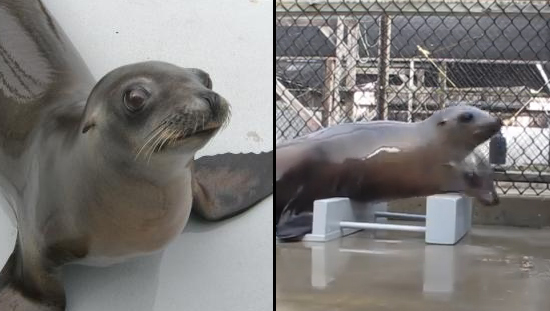 We used to think that only animals with the ability to vocally mimic the sounds of another were capable of rhythmic movement. Clearly, this is not so! Ronan the adorable sea lion at the Long Marine Lab in California bobs her head to the beat of whatever song is played for her. She does so perfectly, even adjusting for the tempo of different tracks. Don’t believe us? Check out the video below and prepare to hit replay just, like, over and over.

3-year-old Ronan, in pursuit of fishy snacks, has unwittingly challenged previous scientific theories stating that an animal’s ability to synchronize its movements with sounds are part of the same brain function that also allows for vocal mimicry. Birds, especially, have this ability — and we’ve certainly seen our share of dancing birds before. But sea lions, while they can be noisy, don’t have vocal mimicry capability. (That we know about? Maybe they just don’t have anything to say yet.)

Doctoral candidate Peter Cook at the University of California conducted six experiments, wherein Ronan bobbed her head to the beat of various songs — including John Fogerty’s “Down on the Corner,” Earth, Wind and Fire’s “Boogie Wonderland,” and the Backstreet Boys’ “Everybody” (sorry, Ronan, you deserve better!). She even showed that she could match the beat of five different tempos of “Boogie Wonderland,” a feat that could be matched by exactly zero people in the Geekosystem office.

What’s more impressive than the natural ability Ronan demonstrated is that her beat-matching skills continued to improve over the weeks of the trial. Computer-generated ticks were used like a metronome to make sure she wasn’t just bobbing her head to a previously-used beat — with one series of ticks that missed a beat, one that did not. She kept it going spot-on.

“Dancing is universal among humans, and until recently, it was thought to be unique to humans as well. When some species of birds were found to have a similar capability for rhythmic movement, it was linked to their ability to mimic sound. Now we’re seeing that even mammals with limited vocal ability can move in time with a beat over a broad range of sounds and tempos.”

Follow-up videos should certainly be in order. As citizens of the Internet, I think we need to demand that Ronan be allowed to show her stuff to “Gangnam Style” and “The Harlem Shake” in short order, as a seal dancing to the world’s most viral videos is, in point of fact, our birthright.