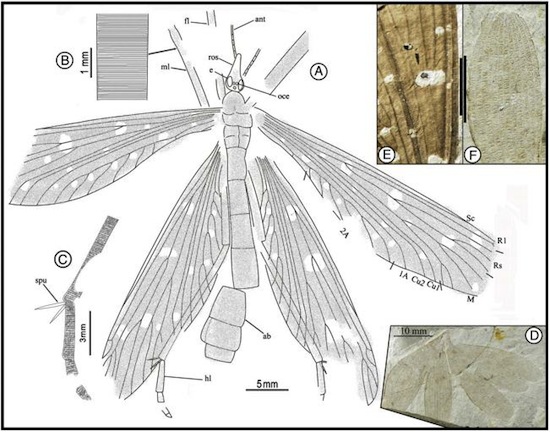 Paleontologists in China think they’ve discovered a species of scorpionfly that dates back to the Jurassic era, where it used it’s leaf-like wings to become indistinguishable from the gingko leaves in which it made its home, using the cover not only to evade predators, but also to lay in wait for their own prey. If they’re right, it makes this specimen one of the earliest examples of mimicry known to researchers.

Researchers have had access to the newly identified fossil fly for years, but had consistently mistaken it for an example of a gingko leaf. They’re in good company, though — that’s the same mistake the fly hoped that both predators and prey would make on seeing it.

The specimen dates back to about 165-million-years ago, and is an example of the scorpionfly family, named for the terrifying stinger-like objects they display. There’s no reason to be unnerved, though — they’re not poisonous. In fact, that “stinger” is just the male fly’s ludicrously oversized genitalia. Scorpionflies are also known as hangingflies for their peculiar hunting method, which more resembles spider than fly. The flies spread their wings and hang motionless from branches to blend in with their environment, only to snatch and devour unsuspecting insects who pass too nearby.

With this specimen, researchers think it’s now clear that this hunting tactic is not a new one among scorpionflies. That also suggests that insects have been mimicking plants longer than most in the field suspected. Prior to this find, the oldest fossils to show signs of being mimics re little older than 100 million years, and even then they are more likely to mimic angiosperms, or flowering plants.

If further research bears out these initial findings, it will make the newly found Juracimbrophlebia ginkgofolia the first of its kind by tens of millions of years, as well as the first to use leaves, rather than flowers, to hide. It will also mark the first recorded example of animal and plant evolving to work together in such a way, with the tree providing cover for hangingflies, who in turn offer pest control by devouring potentially dangerous insects before they can damage the tree.