Sea Otters To Save World From Environmental Collapse 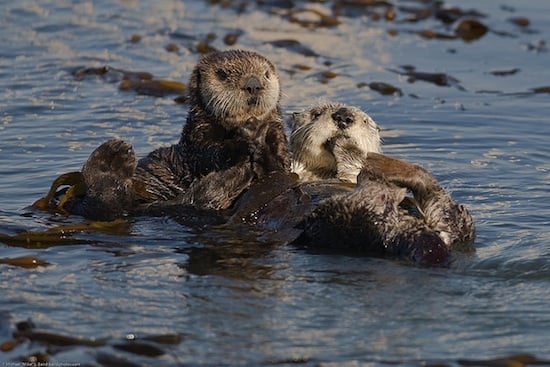 Otters are good for much more than just making people go “Awwwwww” at aquariums across the world. Given enough time, the clowns of the sea could save the worlds from global warming, and all they have to do is what comes naturally — keep eating sea urchins. Which they do with their adorable hands, like they think they’re people!

How it works is this. Climate change is exacerbated by greenhouse gas emissions that come from pretty much everything cool that humans from driving cars to operating power plants to farming cattle. Kelp beds where otters hang out are some of the most efficient CO2 absorbers known to man — they are, as it were, super-effective! But sea urchins love to eat some kelp bed.

This is where otters come in, because otters, in turn love to eat them some sea urchins, preferably while frollicking delightfully in thriving kelp beds. So, let’s follow along —  more otters means less urchins means more healthy kelp beds means less CO2. According to researchers at the University of California, Santa Cruz published in the journal Frontiers in Ecology and the Environment, that simple equation could prove the key to keeping CO2 in kelp beds, where it has less chance to destroy the world.

It’s not a ton of help, ultimately, but considering the greenhouse gas emissions mess we’re in — and how much worse it could get — man, we’ll take any help we can get.

Frontiers in Ecology and the EnvironmentkelpOttersUC Santa Cruz