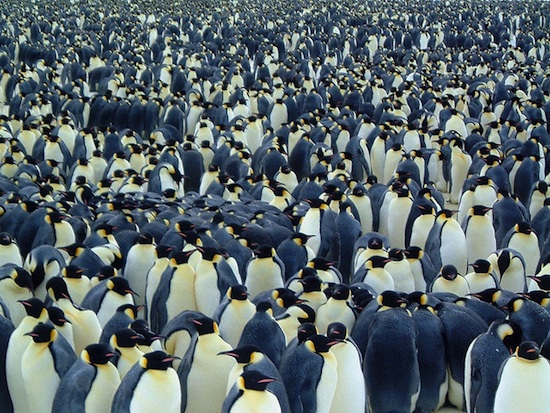 Sharing isn’t always caring, it would seem. In penguins, for example, effective sharing seems to be the result of being kind of a jerk. Researchers investigating the physics of how penguins share warmth by huddling together on particularly cold Antarctic days found that each penguin is trying only to maximize the heat it retains while snuggling with its colleagues, but that the result is an egalitarian cuddle pile in which every penguin has more or less the same access to warmth. In other more important news, there are researchers working hard on revealing the science behind penguin snuggling, because hooray for science.

While it’s pretty much always cold in Antarctica, some days are even colder than others. On those days, colonies of penguins will often gather in “huddles” — basically giant cuddle piles of penguins that are totally adorable to humans and also prevent the penguins involved in them from freezing to death — presumably because freezing to death makes penguins measurably less adorable. Yeah, we’re a little anthropocentric some days — so sue us.

Far from the social behavior it looks like, though, penguin huddling may in fact be a selfish act that happens to have a beneficial outcome for everyone involved. Reporting in the online journal PLOS ONE over the weekend, mathematicians from the University of California Merced modelled a scenario in which each penguin in a huddle was being totally selfish, trying not to share heat, but only to minimize its own heat loss, like when you steal the blankets from your significant other in the middle of the night.

Researchers began by building a computer model of a penguin huddle with a constantly changing shape, representing penguins on the outside of the huddle who are perpetually moving to try and get deeper in, as well as a model of wind flow around the huddle. This model of selfish penguins showed a nearly uniform heat loss for every individual penguin in the huddle, though it interestingly did not minimize the heat loss for the huddle as a whole. That’s a further suggestion that penguins are more concerned with their own heat loss than that of the group, even if it does work out for everyone in the end.

Of course, this is just a computer simulation, but it’s worth noting that factors like the shape of the huddle and the constant motion of penguins in it dovetail with activity seen by researchers in the wild, suggesting that the science here bears out what we all suspected anyway — that snuggling is, at the end of the day, an empirically good thing. We couldn’t be happier to have that proven.