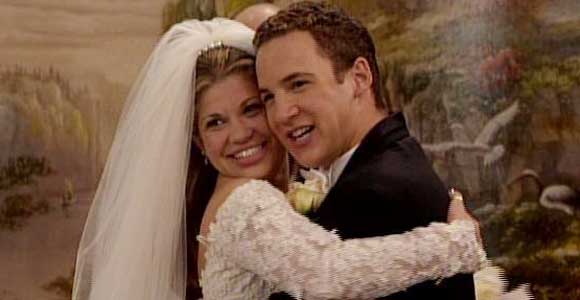 When we found out Disney was working on a sequel series to the 90s sitcom Boy Meets World I just about blew a gasket. Normally I’d balk at such an idea but the plan was to revolve the story around Cory and Topenga’s daughter and call it Girl Meets World. And they were trying to attach the original stars, Ben Savage and Danielle Fishel. All that I could get behind but now it’s time to rejoice without fear of jinxing ourselves – Savage and Fishel are in!!

Both actors have had steady work since their tenure on Boy Meets World but this will be an extra special occasion for both themselves and fans. TV Line, the ones who broke he original story, were also the ones to report the stars signing on. Savage tweeted this about the news:

I’m going to be a father! Well, on TV at least. The “Boy Meets World” sequel is officially happening!

Meanwhile, Fishel had a bit more to say in a specially crafted Tumblr post on the subject.

I do not know how many BMW cast members will be returning for GMW, or how often they may appear if and/or when they do appear. I am going to do my best to not speak for others with this open post.    But because I have known Michael Jacobs, Ben Savage, Rider Strong, Will Friedle, and Bill Daniels for 19 years, I know we share many of the same feelings regarding the 7 wonderful years we spent making BMW. Those years were among the most warm, hilarious, insightful, educational years of my life and I wouldn’t trade them for the world.  Another thing I wouldn’t trade for anything is the integrity and the heart with which BMW was made.  I promise with the entirety of my heart that we will make GMW with the same honesty, innocence, and intelligence that you learned to expect from BMW.

Fishel places fans in the starring role when it comes to the project going forward. “Let me say that you, the fans of Boy Meets World, have been awesome.  That word is often used incorrectly by people, including myself, on a daily basis but you have truly been awe inspiring.  You, yes, even YOU, are the reason that Girl Meets World WILL BE MADE, ” she wrote. “When the news leaked that GMW was in the making, literally days after I first heard about the project myself, Michael Jacobs and I had a conversation and we talked about how we were both so blown away by the reactions from all of you.  We felt honored. We felt nostalgic. We felt touched by the excitement in your comments, tweets, Tumblr, and Facebook posts.  But most of all, we felt inspired.  We felt inspired to bring these characters back to life and to tell you more of their stories.”

Still no word on Mr. Feeny.