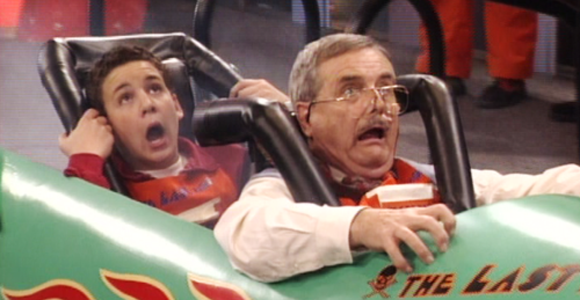 Last week we told you Disney was putting together a Boy Meets World sequel series, Girl Meets World. At first glance we assumed it was another terrible idea from Hollywood but then we found out it was going to follow Cory and Topanga’s daughter and (hopefully) star the original two actors and we were sold. Thanks to some casting calls, we know a little more about where the new series will take us and it’s someplace really cool.

We still don’t know whether Ben Savage or Danielle Fishel will return to their famous roles but the Disney Channel is working towards that goal. We’re also waiting to finding out whether actor William Daniels will make a comeback as Mr. Feeny in some capacity but in the meantime, Zap2It report, “The pilot will be executive produced and written by Michael Jacobs, who served as executive producer of the original series, and it’s set to start shooting in February.”

But here’s what we do know. Cory is a seventh grade history teacher. Yup, he followed in Mr. Feeney’s footsteps. AND, he’s got his own daughter for a student.

13 years old, indelible personality, an adorable girl on the cusp of whatever comes next in life, and wanting to rush into it head first. She is fiercely loyal to her friends, and spends most of her time juggling the obstacles that life throws her way… there is no obstacle in this girl’s world that can dampen her bright spirit and eternal optimism.

Riley is set to have a 14-year-old brother named Elliot who likes to boss her around and a best friend named Maya. Zap2It writes, “She’s a pessimist, and described as ‘darker and less trusting’ than Riley. She’s never known her father, and even though she’s not a good student by any means, she looks to her history teacher, Cory, as a father figure. She’s described as having ‘acerbic wit’ and being ‘absolutely magnetic in attracting or intimidating the people in her sphere as she cares to. Dark and edgy, but just as fiercely loyal to Riley as Riley is to her.'”

Sounds like they have a really solid plan and I, for one, can’t wait to watch.

Just want you guys to know that @bensavage and I have talked and we’ve decided…Thanksgiving is going to be delicious this year!