Game Developers Believe Satan Is Trying to Stop Them From Finishing Bible Chronicles: The Call of Abraham

Protect those daughters, Lot. You're going to need them. 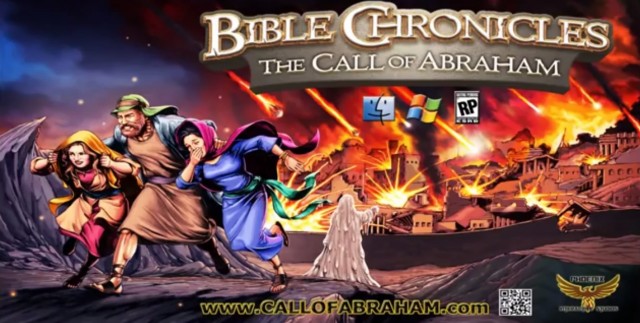 Colin Campbell of Polygon talked to the game developers behind the Bible Chronicles: The Call of Abraham Kickstarter, and it turns out that Satan is trying to stop their game from being made. That’s what they say, at least, and yes, they are completely serious.

Campbell had the pretty normal human reaction of, “Wait, are you serious?” So, he asked them basically that when he met with them to talk about the game.

His exact words were, “I need to be clear on this point: Are you telling me that Satan is literally working to confound your plans to release this game? You’re saying that the actual Devil is scheming against you?” Because, when someone tells you that they’re being thwarted by a demon (Right? He’s a demon?), the correct course of action is to make sure you’re not misunderstanding them and they are, in fact, completely nuts.

And, yes, they are. “I believe that, 100 percent,” replied Phoenix Interactive co-founder Richard Gaeta. He continued, “It’s very tangible. From projects falling through and people that were lined up to help us make this a success falling through. Lots of factors raining down on us like fire and brimstone.”

If Satan is rallying some of his resources to forestall, delay, or kill this project, I think, this must be a perceived threat to his kingdom. I fully would expect something like this to have spiritual warfare. Look at the gospel accounts of demons and so forth. That’s reality. Many Americans don’t believe it anymore. That doesn’t change reality.

Right. Reality, in which magical beings control our fate and keep video games from getting made. Man, Frech’s version of reality sure sounds a lot more interesting than the one I experience. Good thing reality is subjective.

I mean, the game’s downfall couldn’t have anything to do with the fact that its gameplay appears to be QWOPping around, half dressed, with a sword you never use and rescuing people by walking up to them in abandoned buildings. To be fair, the game can’t be finished, because Satan is working against them, so it’s obviously an early build:

Aside from the “that’s about as silly as halting construction due to elves” aspect, there are a few other questions I have about the legitimacy of their claim of Luciference. The project was a Kickstarter that never achieved its funding goal of $90,000. They still managed to get $19,000, because Satan knows that a funding total of $0 would have been too suspicious.

I wasn’t aware that Satan was capable of such things, though. I may not be a religious man, but I’m preeeetty sure the “fire and brimstone” Gaeta alluded to was God’s work, not Satan. I didn’t realize Satan had the power to do anything more than tempt us to be evil. I guess he tempted people to not donate to this Kickstarter?

Well, that’s it, everyone. We must have really screwed everything up if Satan’s got nothing better to do than troll Kickstarter. Congratulations, equal rights movements and contraceptive companies everywhere: you’ve officially completed everything Satan wanted you to do, and the guy is now basically phoning it in.

I mean, he must have been super busy before, because a ton of Bible games have made it through into players’ hands over the years. Well, at least he had the time to make sure they were all terrible. Also, does this mean that all of the non-Bible games I usually play were helped out by Satan, and every game that doesn’t get made was secretly stopped by Satan for one reason or another?

Wait, yeah, Flappy Bird was definitely all Satan. I’m starting to see where these guys are coming from.