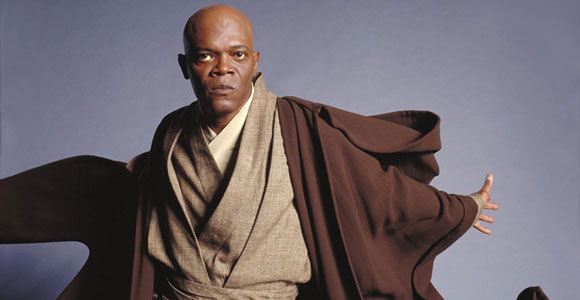 The kind of enthusiasm Samuel L. Jackson expresses for Star Wars is pretty adorable. I mean, come on, he demanded a purple lightsaber. So it’s no surprise the actor would want back in on the franchise that let him have so much fun.

E! News caught up with the actor at the Spike TV Video Game Awards and broached the subject of the upcoming Star Wars VII.

“[I’m] totally geeked by the idea of there being more Star Wars,” said Jackson. “It’s like, okay, Obi-Wan was dead when episode four started, so maybe everyone thinks I’m dead and we’ll find out what happened to Mace Windu.”

Though he didn’t stop there, Jackson threw out a few wild ideas on how his character, Mace Windu, could return.

“I can come back as one-armed or a one-handed Jedi that’s still around that didn’t actually die,” he said. “[I could] be a ghost hologram. I don’t care. I just want to stay associated with the franchise. Not that I won’t because I’ve been in three of them.”

Jackson isn’t the only one talking about wanting to be involved in Star Wars VII. Among others, directors Jon Favreau and J.J. Abrams have weighed in as has Twilight actor Robert Pattinson.

Aside from the three films he’s starred in, Mace Windu has played a role in the animated series Star Wars: The Clone Wars and considering we still have no idea how the franchise is planning to proceed, it’s not out of the realm of possibility for Jackson to reprise the role. Would you want to see Mace on the big screen again?