Another episode about Usagi and Mamoru. Yaaaay. 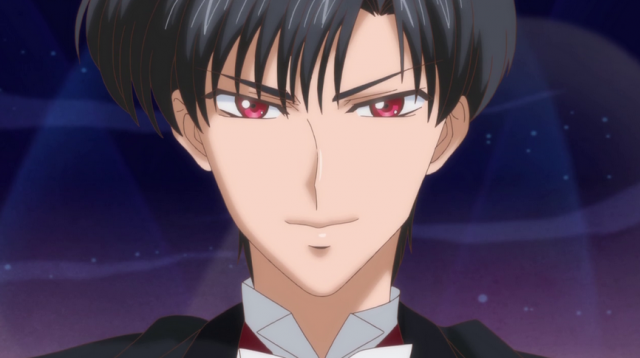 So despite this episode not being terrible and even having some moments I liked, I think I’ve maybe finally hit the point where I don’t actually care about Sailor Moon Crystal all that much. Let me explain why.

But first, if you’re a newbie to the series or you would just like to remember what it was like when you had time to breathe during an episode of Sailor Moon, Susana Polo’s newbie recaps are delightful. Go read them now.

We start the episode out with Usagi in a dream sequence, in which she is chasing Tuxedo Mask as Princess Serenity. It ends abruptly when Luna wakes her up for school, but Usagi’s still stuck in Mamo-chan land. “Fine, I guess I’m not that important to you, whatever,” Luna says, which is quite possibly the most real life cat-like thing she’s ever done. You’re not paying attention to me first thing in the morning when I want you to? Fine, I am going to snub the hell out of you. Enjoy looking at my butt while I steadfastly ignore you until you pick me up and tell me how much you love me. 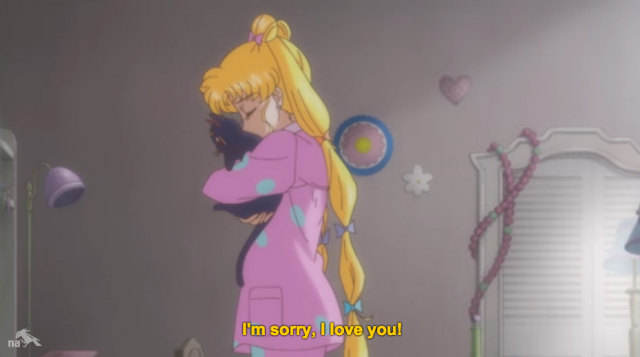 When I do this to my cat, I’m usually pretty sure that she is actively plotting my demise.

As much as Crystal‘s been boring me lately, I do enjoy that the relationship between Usagi and Luna is much, much less antagonistic than it was in the anime. But we’ll get to that more in a minute. First we have to applaud Usagi for her ability to shove all her feelings down and keep smiling, and then we have to knock right into a guy who looks very suspiciously like Mamoru on the way to school—which, because of magic, makes the broken watch Usagi took from Tuxedo Mask start to tick again.

Later that day, brainwashed Mamoru uses his fancy brainwashed powers and new red eyes to trick a friend of Motoki’s into going away forever so he can take his place working at the Crown Arcade part time. His new name is “Endo,” because of course it is. Get it? Endymion? Endo? What a crazy random happenstance!

Reika, who OG anime fans will remember as Motoki’s girlfriend, arrives and is confused by this turn of events. She also has a bunch of books about gemstones with her, one of which has all the stones that the Shitennou are named after on the cover. “Endo” names them all (in the manga it’s Reika who does that because she’s an expert in crystals, so way to steal lines from an underused female character to make yourself look smarter, Mamo-chan) and announces to everyone that he owns them. In the manga’s timeline all four of the Shitennou are dead, and their bodies have been turned into the stones—which makes the line “I own all of those already” that much more chilling. Here it’s just kind of like, okay, as long as they don’t whine about how in love with the senshi they are or whatever.

Anyway, it’s finally senshi-time! They’re on their way to Ami’s swanky apartment to have a meeting about what the heck’s up with this sword they got from the Moon. Rei says Usagi’s embarrassing for being so loud in the lobby, but I just don’t feel her annoyance, if you know what I mean  (and it’s also worth noting the episode cuts a scene from the manga where Rei and Minako are at the shrine talking senshi business, so great). Minako also worries that she’s conspicuous holding a giant sword, which she wasn’t until the entire narrative ground to a halt to suggest she was. She also does not chip the marble floor, sadly, which is one of my favorite parts of this act in the manga. Sigh. 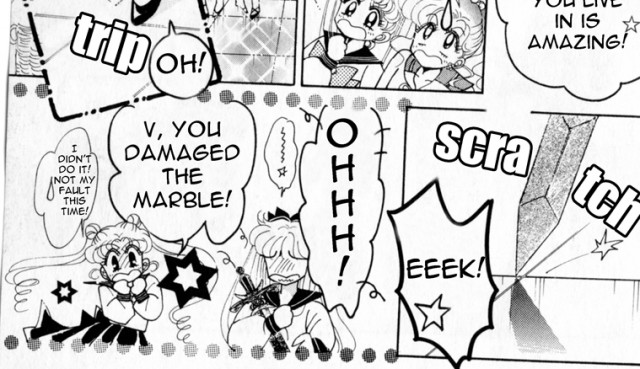 Later the team tests out the sword’s strength by destroying a diamond ring, and Crystal toys with maaaaaybe having fun with its characters for like three seconds before delving right back into boring exposition. 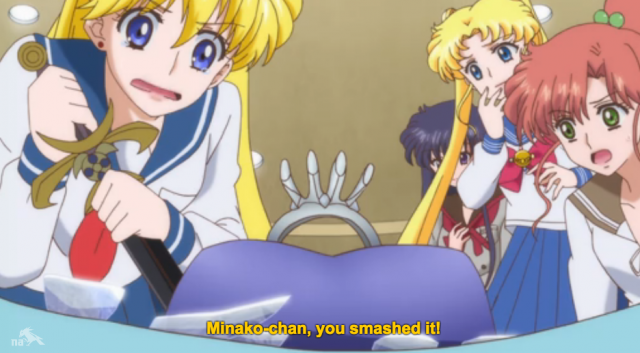 What’s this? An actual wide mouth that depicts emotion? Am I dreaming?

The senshi talk about how the sword might now be infused with a poisonous substance because of the way the Moon Kingdom fell, and Usagi, who can’t handle all the technical stuff, falls asleep. They do not show the part where Makoto picks her up and puts her in bed. My heart weeps for lost senshi love.

Usagi wakes up, makes it about Mamoru, and is suddenly compelled to visit the arcade for no reason at all. There she encounters MamoEndo, who apparently watched a lot of Revolutionary Girl Utena during his brainwashing because he is channeling some Touga-levels of emotional manipulation here while trying to get Usagi to open up to him. He is not wearing his trademark cow print vest. Crystal, if you’re going to draw straight from the manga, what is the point of cutting out all the best stuff? First the marble floor scene and now this? 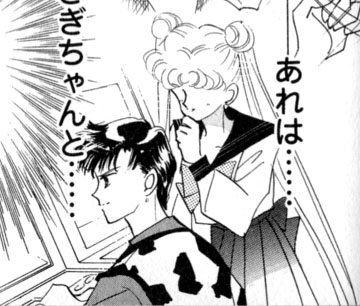 That vest is ICONIC, DAMN IT.

The senshi all follow Usagi to the arcade and notice the striking resemblance “Endo” has to Mamoru, too, but don’t do anything about it. Usagi spends a few days playing the Sailor V game with him, right up until he fails spectacularly at subtlety and asks, “Hey is there a command center underneath the arcade where Sailor Moon and Sailor V hang out together? Just curious for no discernible reason yup don’t mind me” and Usagi finally nopes on out of there.

Ami and Makoto are understandably concerned, even more so when they learn from Reika that Endo doesn’t even go here, man. Makoto, bless her straightforward heart, immediately confronts him and Motoki, which of course leads to her getting brainwashed and leading them straight to the Command Center. Of all the senshi it makes sense that Mako would be the most easily hypnotized because of how honest and emotionally transparent she is, but given how Crystal has done very little to establish its characters in the first place, it just doesn’t sit well with me here.

You know what else doesn’t sit well? Makoto herself, after she leads all the other girls to the center, tries to snatch the Legendary Silver Crystal, and then gets hit into a column by Rei and spends the rest of the episode out for the count. I’m starting to think Makoto is the Worf of Sailor Moon Crystal—her whole identity is based in being the strongest warrior, but she gets her ass handed to her, like, constantly.

After something like three minutes worth of transformations and speeches (time which could have been used for character development, damn it) the rest of the girls get into a fight over the crystal with Mamoru and Motoki. It’s actually one of Crystal‘s better action sequences, honestly; all the fighting is very spatially grounded, and there are moments where you feel like the senshi are capable of winning right before Mamoru gets the upper hand, as he inevitably does. Seriously, just once I wish we’d get a scene where the senshi actually defeat the person they’re trying to fight. I think the last time any of them were actually able to completely defeat a villain on heir own was when Makoto took down the bridal youma six episodes ago. Just another unfortunate side effect of letting all the Shitennou live, I suppose.

Usagi, meanwhile, is not helping because she’s too paralyzed by what I think are supposed to be feelings. “Hey Usagi, do something,” Luna says. “But Tuxedo Mask,” Usagi says. “He’s not the person you love,” Luna says. “Buuuuut—” “Okay you know what? Fuck it. You don’t want to hurt someone you love? How about someone you love gets hurt?” Lunda says (I am paraphrasing), and launches herself at Mamoru in what’s only to get swatted down in what I’m preeeetty sure was a suicide mission.

“Did you just hit my fucking cat,” Usagi says. 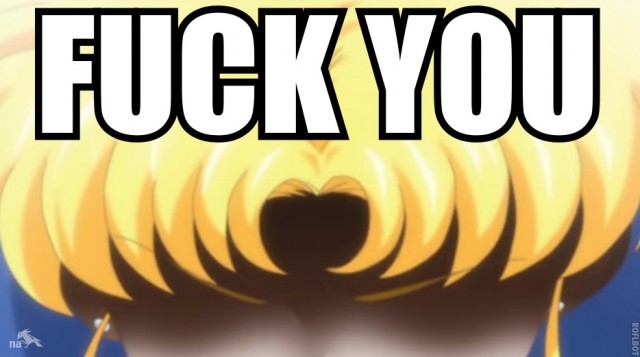 And then Usagi finally transforms—the full sequence again, way to waste time, Crystal—cries over Luna some more, gets reminded by Sailor Mercury that oh yeah she has healing superpowers, uses them, and now she’s gonna beat the shit out of her evil brainwashed boyfriend for being mean to her cat, right? Right?

Nope. Now Beryl shows up to gloat over the senshi and announce her victory, including the fact that this isn’t a fake Tuxedo Mask and she’s managed to brainwash the real thing. “Wait who’s this lady?” everybody says DESPITE THE FACT THAT SHE INTRODUCED HERSELF TO YOU ALL FIVE EPISODES AGO. Ugh. 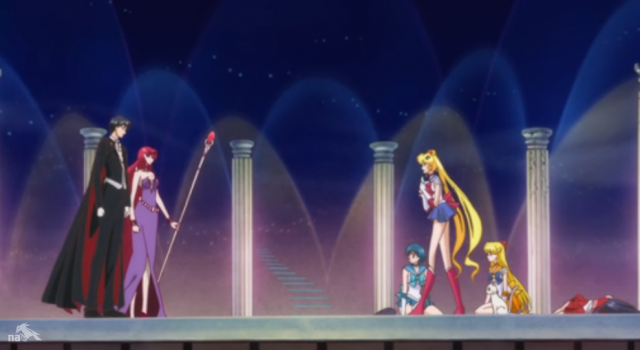 Most awkward house party ever.

So let’s get into why I’ve officially stopped caring about Crystal, more or less. While there were some nice moments in this episode and it didn’t aggravate me as much as the last one, more and more it feels like this show is suffering because of how closely it’s tied to the original manga’s dialogue and structure, with some notable exceptions that usually end up hurting the characters more than they manage to add anything new and interesting.

This doesn’t mean that I love the manga any less, however—in fact, going back to my copy after each episode makes me appreciate that much more how effective the story can be when its told in a way which allows the viewer to experience what’s happening at their own pace. But the gorgeously dreamlike, ethereal quality the manga has just doesn’t seem to work when translated so directly into a dynamic medium like animation. What occurs over the length of a page in the manga takes minutes in the show, which causes all the emotional dialogue and exposition to feel stilted and boring. It also doesn’t help that at times the comic actually feels more vibrant and alive than the animation does, because the show still insists on making its characters pretty over making them personable. It’s all very nice to look at, but not particularly interesting to watch.

This doesn’t mean the recaps are going away because of my newfound indifference, of course— I’ll still be watching on the off-chance things get better (honestly, the Dark Kingdom was always the weakest arc of the manga for me anyway, especially compared to all the great character stuff we get in the Dark Moon and Stars Arcs). And if you’re still super invested in watching the show every two weeks, then I salute you! But I also don’t think these problems are going away, so I’m not going to get my hopes up all that much.