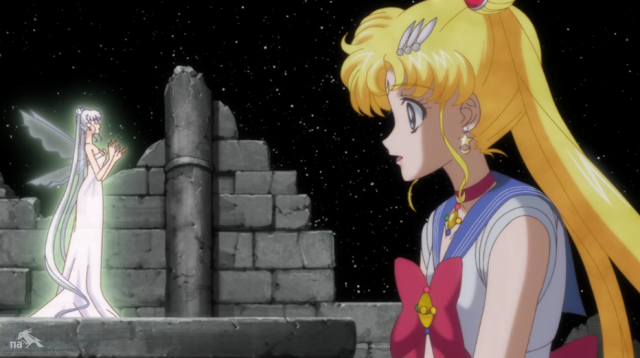 Damn it. This episode was going so well, and then they did the thing and I am mad about it.

As always, I get into spoilers for both the manga and the original anime. Go read up on Susana Polo’s newbie recaps instead if that’s more your speed!

Last week ended on a promising note that got picked up again at the beginning of this episode: hell yeah! We’re going to the Moon! Silver Millennium backstory, yeah! But they need the Moon to be full for their power to be at its highest level, or something, so they have to sit around and wait for a while. Ami spends that time reading a whole bunch of facts about the Moon that won’t actually factor into their journey later at all because of magic or… whatever. Rei still feels devoid of a personality. Minako continues to know everything and not tell anyone about it. Mako is PUMPED FOR MOON TRIP YOU GUYS. And Usagi is as well, in her own way (note: Usagi’s “way” involves making it all be about Tuxedo Mask because of course that’s what the show is about).

Later Usagi finds her family downstairs; her father brings her back the Legendary Silver Crystal, which she asked to have put on a chain so she wouldn’t lose it. “Is that from your boyfriend?” he asks, and then she says “Kind of?” which isn’t technically accurate because the crystal literally has nothing to do with Mamoru except that she cried over him a bunch and that’s how the found it. But okay, that is pretty hard to explain, so I’ll let her slide on this one. And then her father and mother marvel at her suddenly looking all wistful and grown up before she runs off to berate Shingo for playing with her DS, and it’s all pretty cute.

But we can have Tsukino family fun time later! Now it’s time to go to the Moooon! Which once again becomes all about Mamoru when Usagi looks around and realizes they’re at the same place where she and Mamoru promised to exchange their keepsakes with one another. 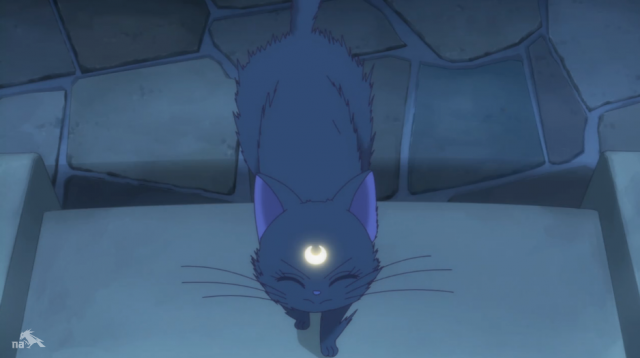 “THE SHOW IS NOT CALLED TUXEDO MASK CRYSTAL, USAGI”

Okay, no, she’s actually… I don’t know, pooping out some space energy from a nearby lake or something so they can use it to go to the Moon. But let me dream, friends. 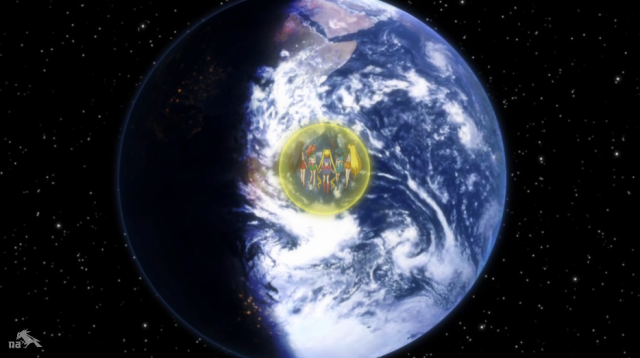 Once on the Moon, they explore the ruins of the Silver Millennium. Sailor Moon Crystal gets a lot of things wrong with perspective, often to cut down on production costs by focusing exclusively on close-ups of characters’ mouths. But credit where it’s due: this is the first version of the Silver Millennium I’ve ever seen, original anime included, where I really felt like this was a large Kingdom that was decimated. Of course, the effect is marred somewhat by how easily the senshi are able to traverse the ruins, but I don’t mind chalking that up to TV magic.

Inside the “prayer room,” the senshi come across a sword stuck in a stone, and have to work together to pull it out. I don’t hate how it was Venus to eventually get the thing loose because she is officially the senshi’s leader and I guess you could hand-wave it off with special Moon magic, but… I don’t know, I kind of wish this scene didn’t make it seem like Jupiter’s strength doesn’t actually matter. That’s her thing, guys!

Anyway, the sword comes loose and then so does a tiny hologram of Queen Serenity, AKA the lady from the opening credits who was blond for a hot second because of reasons.  She exposes some reason why she still exists  (and as a side note, is it just me or are the English subtitles very poorly translated for this episode? I have no idea what’s going on for most of the Queen’s speech) and explains the tragic Silver Millennium backstory one more time, in case the audience wasn’t getting it: Princess Serenity and Endymion were in love, some dark evil infected the humans of Earth and caused them to attack the Moon, Endymion was killed in the attack, and then Princess Serenity died, too. Oh, but here’s some new information! She also killed herself.

Agh, okay. That’s in the manga, and I don’t hate it yet, but if you know the manga then you also know that Sailor Moon does kind of the same thing in a later act with that sword they just pulled out of the ground. The last episode did bring up that Serenity was not the same person as Usagi is, so I’m hoping that maybe the writers pull their heads out of their butts for a second and maybe not have her repeat that, because the implications of killing yourself over a boy kind of suck a lot. Of course, after this episode I’m not so sure.

But I’m getting ahead of myself. At least we also got this brief glimpse of a personality from Silver Millennium Mars: 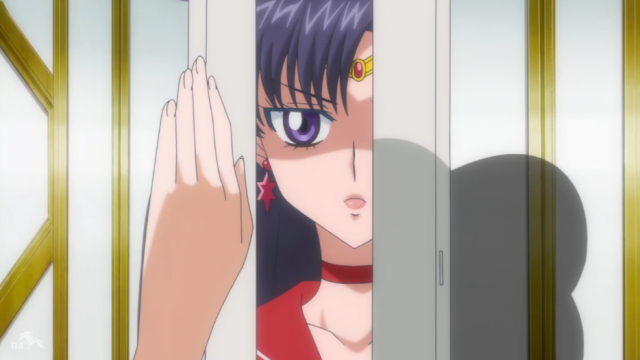 Why don’t we see this look on Rei’s face all the time?

And it’s worth pointing out that the art is spectacular so far in this episode. I also really love the actress they’ve gotten for Queen Serenity, and not just because she once played Esmeraude in the original Sailor Moon R: she also has this perfect balance of authority and gentleness that works for the character.

Meanwhile, in the Dark Kingdom, Beryl is talking to Metalia and all the shitennou are eavesdropping. Kunzite and Zoicite are standing next to each other for a good three seconds while listening in and I got really excited about the implications of that even though literally nothing happens. I feel like a real slash shipper now.

But alas, it was not meant to be, because Beryl happens to mention that she’s brainwashed all the shitennou and just like that, their memories come flooding back—they were the generals in Endymion’s army during the time of the Silver Millennium, and they all have… very weird titles. 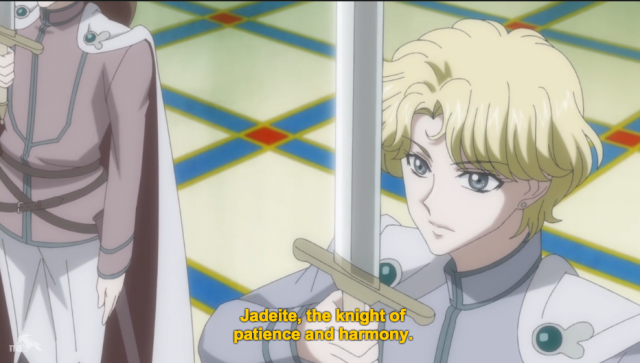 Not “the knight of taking women less seriously and getting hit by airplanes?”

Their revelation is short lived, though, because Beryl immediately re-brainwashes them and sends them out to attack the senshi in Tokyo—which, by the way, is now trapped in a frozen ice prison, along with the rest of the entire world. Did this become the Sailor Moon S movie all of a sudden? Is Luna going to kiss a man? Please don’t do that, show.

Now, the Shitennou always sort of did get shafted in the backstory compartment compared to every other Sailor Moon villain, so I didn’t mind a little more focus on them in this episode at first—especially once the battle began because HOLY SHIT WAS IT AWESOME.

But then Venus drops a bombshell on the whole group: all of them used to be in love with the shitennou back in the Silver Milennium. And this realization messes them up so bad that they CAN’T EVEN FIGHT BACK ANYMORE??? 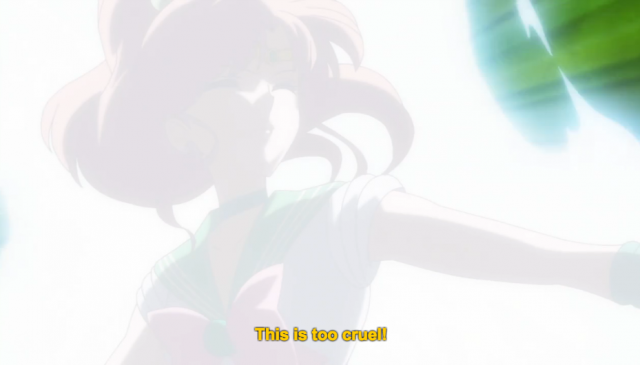 A bit of background on the senshi/shitennou pairing, since it’s not completely unpopular within the fandom; the concept does not come from the manga, but from an image by Naoko Takeuchi that can be found in one of the artbooks for the series. Most who subscribe to the ship assume that Takeuchi meant for the pairings to be canon but never got around to actually including them, save for a scene in Sailor V when it’s revealed that Venus might’ve had a thing for Kunzite but committed herself to protecting the Princess.

That reveal in Sailor V, by the way, happens just before Sailor Venus must kill the guy she likes because he’s trying to destroy the world. In fact, remember how I’ve been saying this whole time that each of the shitennou are dead? That’s because each of the senshi who were paired up with them killed them.

So yeah, I’m pretty annoyed that Crystal‘s senshi literally put their fists down and stop fighting when they discover their connection to the Shitennou. But I also tend to find the pairing cliché as hell to begin with—here are four women and four men so naturally let’s pair them up together because they need to be in relationships, right?

Even more annoying to me, though, is the way that this scene gets resolved. First, Sailor Moon saves all the other senshi with her tiara that she has not been wearing this entire time. Then she flies up into the air in a giant ball of golden light and uses her Moon Stick to melt all the ice, which reminds the senshi that oh yeah, they’re supposed to be fighting! So they combine their powers into a Sailor Planet Attack, which… eh. Compared to the way that attack usually looks in the original series, it felt kind of lackluster—especially because it doesn’t even work, and the shitennou run away to fight another day. Again.

Finally, the episode ends with Mamoru yet again—Beryl’s brainwashing is complete and he’s now heading towards the Crown Game Center to complete his mission of taking the Silver Crystal. And that’s it. The episode’s done from there. Meh.

I had pretty high hopes for this episode after last week, because I was excited to see some rad Silver Millennium action. There, the show delivered more or less what I expected, though admittedly my expectations of Crystal have been drastically lowered over the course of watching it. But senshi/shitennou was kind of the last thing I wanted from this series, and now I’m really dreading where the show will go from here. There’s still time to pull it out of a tailspin, I suppose, but I’m even less hopeful now than I was earlier this month.

Oh well. At least we have three weeks to forget that Sailor Moon Crystal is a thing and marathon a whole bunch of Ail and An R episode on Hulu to get back all the character development and filler we’re missing with this version, right?