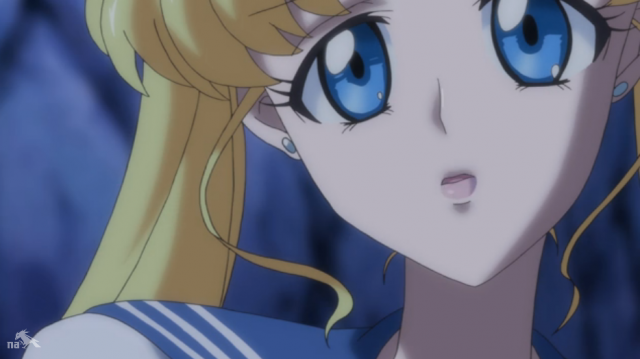 Uh oh—this is the first episode of Sailor Moon Crystal that I’ve actively disliked. Let’s talk about it.

A note: these Crystal recaps often draw on comparisons to the previous Sailor Moon adaptations, so if you’d prefer to start fresh, head over to Susana Polo’s newbie recaps of the original series instead. This week we’re going to get much more into manga territory than usual due to the specific nature of the frustrations I had with this episode, so be careful if you were hoping to read it first.

We begin right where we left off in the last episode: Luna gives the Moon Stick to Sailor Moon, telling her that she will be the group’s leader. Whatever, that’s not important right now—look at the changes they made to the opening credits! It’s mostly cleaning up the animation here and there, but the blond Queen Serenity’s been replaced by a more more on-model silver-haired one. Hooray! It only took them six episodes.

Speaking of which, Mamoru is having a Silver Millennium dream, where a princess who definitely isn’t wearing her hair in odango pigtails that are being deliberately obscured to us, no sir, pleads with him to retrieve the Legendary Silver Crystal. Upon waking, he reflects on the dream into the very large window of his fancy apartment, reminiscing about her not-odangos. 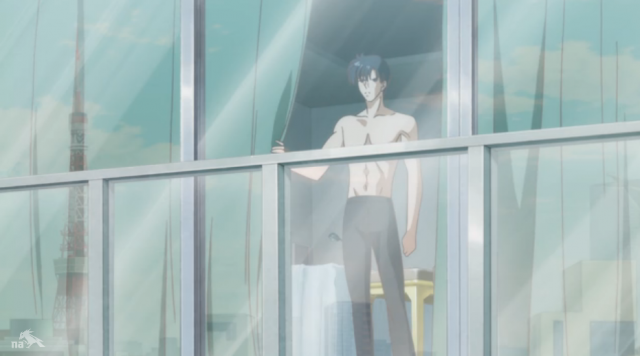 He also appears to be made of abs.

Usagi had the same dream too, it turns out, but from the princess’s perspective. She calls it a “bad dream,” but at least it got her out of bed just in time to ram into Mamoru on the street. He’s considerably less dickish to her now that he knows her secret identity, but she still refuses his help. Not three seconds after he walks away, Tuxedo Mask appears on television to ask the citizens of Tokyo for their help gathering information about the Legendary Silver Crystal. It must have been a slow news day, because literally everyone and their grandmothers start excitedly talking about it to one another like they’re discussing the latest viral cat video.

Even Beryl and the Shitennou notice the commotion from their lair. Kunzite thinks it’s hilarious, but Beryl is not amused—as far as she’s concerned that’s her Silver Crystal, and they don’t even have enough energy for their great ruler because someone screwed it up again, NEPHRITE. Yeah, he’s off in the corner being a whiner, wailing that he would have gotten away with it if it weren’t for that meddling Sailor Jupiter. Whatever, bro. Zoisite’s got it this time. Punk.

That night, the team is hanging out in the empty arcade at night, probably just so they can depict the moon behind Luna as she tells the girls that’s where they’re all from. If the great evil is awakened and gets ahold of the Silver Crystal, they could wield the power to destroy the entire planet, she tells them. Usagi, not knowing how to deal with the news, turns her attention to the Sailor V game and sees that her hero is using the same kind of Moon Stick that she has. Apropos of nothing, the game character turns to her and tells her that she can do it, prompting her to think that maybe she’s losing her marbles. “Sailor V’s probably an actual senshi too, right?” she asks to save face. The other girls shrug and say that they haven’t seen her around much since they started fighting evil, too.

The next day, Zoisite has figured out the perfect way to use all this Silver Crystal talk to his advantage: by dressing up in drag, pretending to be an expert in Silver Crystalology, and flooding the airwaves with hypnotic messages that make everyone in town actually go looking for the crystal rather than just talking about it. The senshi don’t appear to be affected at all, but the rest of the town is starting riots in an effort to find the crystal, so the team decides to meet at the arcade to come up with a plan.

Cut to nighttime again, and this is when I start to get annoyed. Guys? People were breaking into jewelry stores and ripping purses out of each others’ hands earlier. Kiiiiinda feel like you should have met up before it got dark. Luna leads them all downstairs to her secret base (which is admittedly very cool) and pinpoints the television station as the source of all the bad energy. When she points out that it’s very possible Tuxedo Mask is behind this, Usagi throws a tantrum and runs away.

Zoisite, bored of watching the humans search for the crystal in vain, decides to flip a kill switch and just start sucking everyone’s energy out instead. But the senshi are here to save the day! Well, okay, Makoto, Ami, and Rei are here, because I guess it didn’t occur to them to go after their friend and the leader of their superhero team in the middle of a terrible crisis.

Oh, also? They show up in their school uniforms, and then they transform right in front of Zoisite. Why???? Why. I mean, I know all of them were awakened while a Shitennou was present, but why even give him the opportunity to attack you when you’re not at full power? 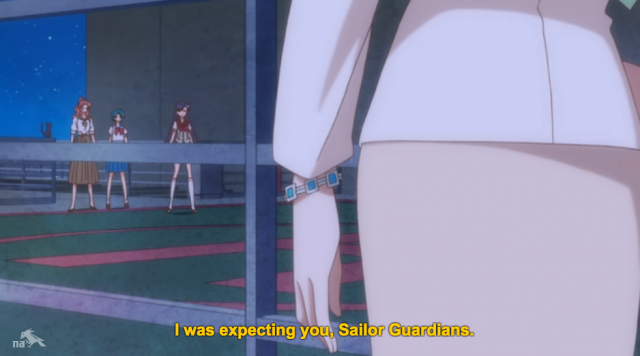 Meanwhile, Usagi collapses for no reason. I think we’re supposed to believe that she tired herself out from running, because as we established earlier, she’s not affected by Zoisite’s plan at all in this continuity (more on that later). Luckily Tuxedo Mask is there to catch her and tell her that this is kind of his fault, and that he didn’t know how to get the Silver Crystal because he doesn’t have cool powers like they do. “Yeah I feel you, I’m the leader and I have stupid powers,” she says. “Speaking of which, where is everybody? I should probably be actually doing something rather than just standing here talking to you.” Just kidding! She does not say that last part, much to my eternal chagrin.

The other senshi are off in an intense elemental battle with Zoisite, which is also pretty cool to watch. It would be even cooler if they had some backup right now, but Usagi is taking her sweet ass time and it’s really starting to get frustrating. 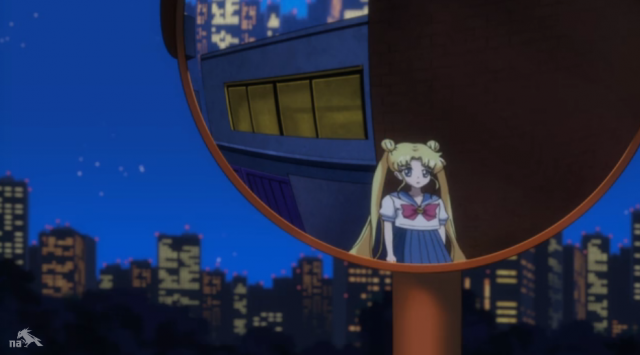 HEY AREN’T YOU SUPPOSED TO BE DOING SOMETHING RIGHT NOW

And it’s about to get worse! Because Beryl shows up. And I have very strong feelings about how terrible an idea this is, narratively. After all, Beryl is supposed to be the big bad; she is terrifying precisely because she operates behind the scenes, too powerful and important to get her own hands dirty. Bringing her out of the Dark Kingdom and onto a random roof in Tokyo to gloat at the senshi—who for some reason are lying on their backs in perfectly posed positions, calmly awaiting death—dilutes her impact as a character considerably.

But at it’s not as bad as what they’re doing to Usagi’s character right now, because she’s STILL STANDING THERE DOING FUCK-ALL. Apparently it has just occurred to her that she’s supposed to have a secret identity and now she’s shy about transforming in front of Tuxedo Mask. Never mind that all of her friends just transformed right in front of the Dark Kingdom’s generals three seconds ago and are now inches away from sweet oblivion. Consistency be damned, right guys?

If this were a fair and just world, Tuxedo Mask would have said something like “Girl, I literally pulled you out of your goddamn bedroom last week. Of course I know who you are. Get your shit together.” Instead he just tells her to transform. But she’s still stalling, complaining that she doesn’t have the same cool powers that her friends have. Holding her close, Tuxedo Mask tells her that her power is being able to make other people feel special about themselves. Normally I am all for friendship-loving senshi fandom member Tuxedo Mask, and I do legitimately like the way they’ve established the romantic feelings here, but that all of this quite literally involves Usagi shirking all of her very real and urgent responsibilities is downright infuriating. Hey, Tux? You can’t have this pep talk on the go?

Finally she transforms and makes it to the TV tower almost immediately, where she performs a version of Moon Healing Escalation that doesn’t actually heal anyone and instead incapacitates Zoisite. Rather than wield the phenomenal cosmic power that she literally just got done saying she was going to crush them all with, Beryl decides instead to pick up Zoisite and disappear back into her ominous doom cloud. Why even show up at all, then, Beryl? You’re supposed to be Sauron, and this episode turned you into Dr. Claw. 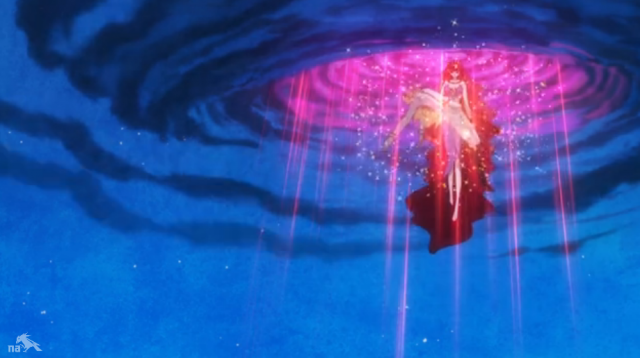 “I’ll get you next time, Sailors! NEXT TIME!”

Then Sailor Moon leaves the rest of her friends to go collapse into Tuxedo Mask’s arms again. He kisses her (you know what’s fun, Mamoru? Kissing people while they’re awake, try it sometime), and then takes her back to his apartment where she discovers his secret identity. We also got our first glimpse of Sailor V and Artemis, but I was too fed up with the plot holes throughout this episode to be excited about it. I mean, did the senshi not talk after the battle? Did Sailor Moon just beat up Zoisite and run? Are they still stuck on that roof?

Part of my immense frustration with this episode has to do with how the timeline of events is so warped from what they are in the manga—not because I think the show needs to line up with the manga exactly in order to be good, but because the changes don’t make any sense. To compare: in the manga, Zoisite flips the kill switch almost immediately and people begin collapsing, including Usagi, who passes out on her way to the arcade. There’s no coyness about whether or not Tuxedo Mask knows Usagi’s secret identity, and she transforms in front of him without hesitation. The other already transformed senshi meet up at the TV station and have absolutely no problem driving Zoisite away but don’t know how to wake up the townspeople. In a different location, Sailor Moon uses her Moon Healing Escalation to, you know, heal everybody. Problem solved, and everybody’s definitely doing the best that they can without standing around feeling sad and awkward about themselves while their friends are getting hurt. It’s not a perfect narrative by any stretch of the imagination, but it at least doesn’t make Usagi out to be exactly what she fears she is: ineffectual and useless until the last second.

From day one I’ve been excited over the prospect of Sailor Moon Crystal doing something new with the story we all know and love. But messing with the timeline and upping the stakes of the battle just didn’t work here, because both ended up cheapening the way that the characters interact with each other. It felt sloppy and rushed and not at all what I want from a new Sailor Moon adaptation. Hopefully this will serve as the weakest point of the series and we can expect better things (although if you were happy with the episode, that’s fantastic) as the series starts to dig deeper into the Silver Millennium storyline.