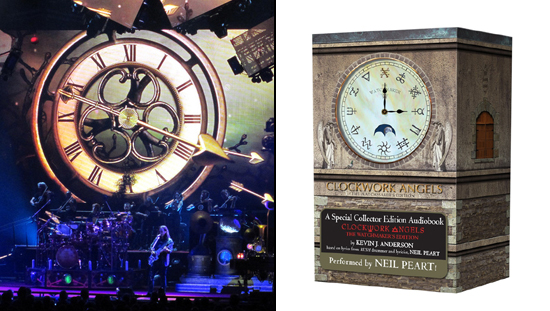 There is possibly nothing nerdier in the world of music than progressive rock, and in the world of prog rock there’s nothing geekier than Rush, the Canadian trio described as “the world’s biggest cult band.” While they’ve been around since 1974, making them one of the most enduring prog rockers out there, this last year has been a momentous one for both Rush and their legion of smart-but-awkward, fanatic-but-quiet fans who stand in the shadows or at least stage left. Here’s why: They’ve recently announced a continuation of their Clockwork Angels tour — in which they performed nearly the whole eponymous steampunk concept album they released last year. And oh yeah, this year they’re being inducted into the Rock and Roll Hall of Fame — after years of exasperation from fans, though they were totally cool with the exclusion. So, what’s the actual news? Tomorrow they’re releasing Clockwork Angels: The Watchmaker’s Edition.

Given its price ($62.99 on Amazon), this probably isn’t an easy grab even for hardcore fans, but Clockwork Angels: The Watchmaker’s Edition is an audiobook of the novelization of the album — written by Nebula-nominated sci-fi author Kevin J. Anderson in cahoots with Rush’s drummer/lyricist Neil Peart — packaged in a miniature clock tower with a working clock. Nerdy and slick, but yeah, expensive.

Now I feel the need to explain why we at Geekosystem — or specifically I, as there’s no accounting for taste — would be talking about this band. If you’re a Rush fan, you already know. If you’re not, or if all you know about Rush is that the singer, Geddy Lee, has a “squirrelly” voice (my father’s description), then allow me to concisely bullet the reasons. 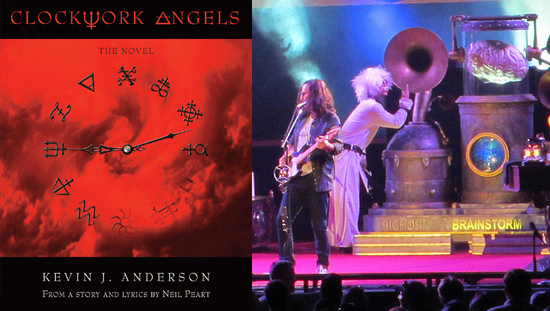 You might note that there’s hardly any talk of love in all that. Sure, there are one or two, but Rush love songs have intellectually romantic lyrics like:

You and I, we are strangers by one chromosome
Slave to the hormone, body and soul
In a struggle to be happy and free
Swimming in a primitive sea

If nothing else, consider listening to 1984’s “The Body Electric,” which is about a robot who escapes the routines he’s been locked into for one hundred years. Or just watch the laughable-but-still-fun video. If you haven’t heard this before, you’d be doing yourself a disservice by not rectifying the situation now.