This Music Video Features Monsters of All Kinds, Makes You Doubt Your Sanity 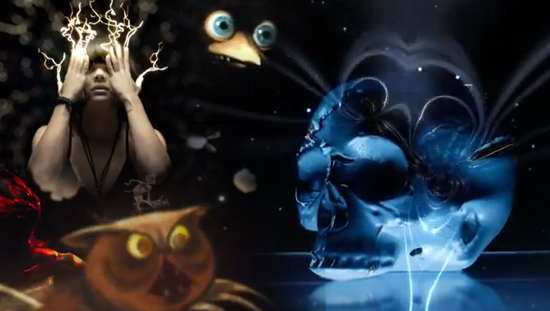 It’s true that there’s no accounting for taste. You may love music your best friend loathes, but have you ever watched a music video on YouTube that’s just so crazy that you had to share it, no matter what the music was like? The new Bat For Lashes video, “Lilies,” may be one of these. You probably know someone who’d love it just because it’s got monster puppets and stop-motion fun. It’s kind of like if David Bowie’s Goblin King kidnapped Big Bird and Snuffleupagus, fused them together with Jeff Goldblum’s Telepods from The Fly, then brought them to the land in Where the Wild Things Are. Oh, and then the monstrosities danced with a girl who was possessed by the ghost of Björk. Yeah, that’s about right.

Now, I happen to the like the music, too, and in fact most of Bat For Lashes’ discography (the song “Glass” is the best of the best). English-Pakistani Natasha Khan, the woman behind the Lashes, is an indie pop folktronica artist — because categorizing music is hard these days — who’s been nominated for all kinds of music awards, and won some, too.

“Lilies” was directed by Peter Sluszka, who’s done video work for the likes of Regina Spektor, Björk (I called it!), Landrover, PNC, and, curiously, Crest. The lyrics are poetic and not obviously about any one thing, certainly not pantomiming monsters and MST3K-meets-Roger-Dean landscapes. Although “I was empty as a grave and ghostless was the air” is a cool line that works just as it is.

So with that in mind, have a look at “Lilies” and see if your sanity makes it through unscathed. Good luck!

Did you make it? Congrats, you’re still human…mostly. Seriously, this video immediately made me think of Björk’s “Human Behaviour,” only with a slight technological upgrade and a light touch from Jim Henson’s Creature Shop. But this is a good thing and I’ll take it over anything that crops up on any of MTV’s spin-off music channels. Score one for the Internet.

Also, at one point in the video there’s a skeleton riding a bicycle through space. Which is enough of a reason to have been worth your time.