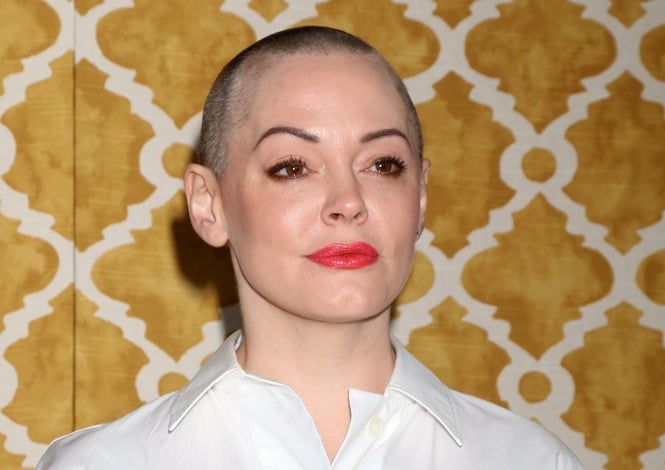 The actress and activist, Rose McGowan, is apparently wanted by authorities in Virginia for an incident last January concerning the possession of a controlled substance. Why are we hearing about it now? It wouldn’t have anything to do with Harvey Weinstein, now would it?

McGowan has been the most outspoken critic in Hollywood about Weinstein’s abuses to herself and others. She was briefly, inexplicably silenced by Twitter but emerged all the stronger, invited to speak at the Women’s Convention, where she gave a rousing speech. She’s been affixed in the spotlight in the weeks since the Weinstein news broke and has bravely withstood its glare, calling out her fellow actors for lying about their own actions and what they knew of Weinstein’s.

So forgive me if I don’t find it a little suspicious that there’s suddenly wall-to-wall GIANT HEADLINE coverage of an arrest warrant apparently issued for McGowan in February. Per CNN:

“On February 1, 2017, the Metropolitan Washington Airports Authority Police Department obtained an arrest warrant for Rose McGowan, an actress from Encino, California, for possession of a controlled substance,” the statement read. “The felony charge stems from a police investigation of personal belongings that tested positive for narcotics and were left behind on United flight 653 arriving at Washington Dulles International Airport on January 20, 2017.”

Authorities said they have been trying to reach McGowan to get her to court.

Yeah, this just doesn’t pass the smell test. It took police ten months of “trying” to get in touch with a public person with multiple representatives? And they decide to go public with this information and allegation right this very moment—the same moment that Rose McGowan has become a household name for speaking out against sexual violence by one of Hollywood’s richest and most powerful men?

Clearly, the warrant for McGowan was not so pressing or dangerous a crime—personal possession of narcotics is basically America’s favorite pasttime—and in Virginia, possession of a controlled substance by a first-time offender is considered a felony, but for someone of McGowan’s wealth and prominence, it would likely command a fine and maybe some community service.

Further reporting by Radar says that the substance was cocaine, which falls under “Possession of a Schedule 1 or Schedule 2 Narcotic” and that there were “traces” of it. These airport cops would be shocked, shocked I say, to visit any bar bathroom in New York City. The less-than-severe “severity” of McGowan’s alleged possession is probably the reason why we haven’t heard about it before. Traces of cocaine on an item alleged to be hers? Give me a break.

This is why Virginia police probably made such a half-hearted attempt to “contact” a movie star over the course of 10 months. The authorities have a lot bigger fish to fry. That’s also why it’s impossible for me to believe that this warrant is, overnight, a widely publicized piece of news without a push from Weinstein and his minions behind the scenes. McGowan also thinks that this is meant to purposefully shut her up:

Are they trying to silence me? There is a warrant out for my arrest in Virginia. What a load of HORSESHIT.

If @rosemcgowan would have taken that million dollars in hush money I’m quite sure this wouldn’t even be a headline…😒 https://t.co/nWskRcmsaO

If this warrant business is not causing McGowan to be silenced—because she refuses to let it—it’s at least an attempted smear on her reputation and an attempt to hoist respectability politics back into the toxic Weinstein mix. “If McGowan is a drug user”, this tries to whisper, “can she be trusted? If she breaks the law, can we hold her assertions to be true?”

Yes and yes and a thousand times yes. Notice, again, how substances are used against a woman to cast doubt upon her character, and how they’re used as an excuse for predatory behavior by men like Kevin Spacey. Continue to trust and listen to Rose McGowan.

This is all happening the very week that McGowan claimed Weinstein had offered her $1million dollars to stay silent prior to the New York Times expose on him, which she turned down. Weinstein orchestrated some of the most successful Oscar campaigns in movie history. Do you really think he doesn’t know how to send the press after an opponent and try to shift the narrative?

According to the CNN article, the Virginia police mention that the warrant for McGowan “was also entered into a national law enforcement database,” which means that this information would have been available to anyone capable of running a simple background check—it’s not hidden (most employers do a National Wants and Warrants Search when considering you for a job, to check for outstanding warrants). But the push to publicize it and galvanize the police into action now of all times is very convenient.

If you don’t believe this attempt to smear Rose McGowan came directly from Harvey Weinstein, who is currently sucking at “sex rebab,” or from one of his supporters, I have a bridge to sell you in Brooklyn.