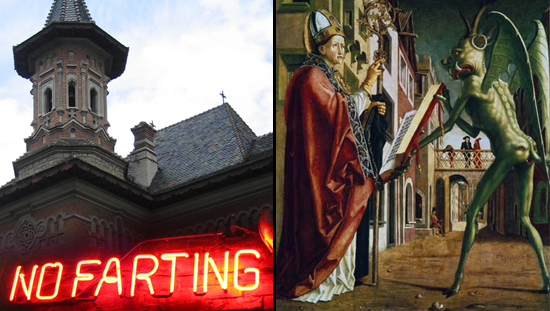 People sue each other for all kinds of crazy things, from spilled coffee to disturbing items found in fast food burgers to failure to stop someone from falling in love. But right now, Romania takes the cake for the stinkiest lawsuit ever. See, a lawyer in Pitesti, Romania, is suing an Orthodox bishop and four priests for failing to exorcise the “flatulent demons” from his home. You probably read that right, but let me rephrase for clarity. He’s suing several priests for not getting rid of his fart devils.

This case of clear “religious malpractice” is the first of its kind in a Romanian court — and, one hopes, everywhere else.

The plaintiff is one Madalin Ciculescu, a 34-year-old lawyer whose home was allegedly afflicted with some very bad smells courtesy of flatulent demons. Since he presumably asked himself, “Who you gonna call?”, he turned to local religious authorities. Clearly, this was an incorrect decision, and Ciculescu deserves whatever is coming to him.

Four priests were dispatched to his home by Bishop Constantin Argatu, and the men attempted in vain to rid Ciculescu’s property of its malodorous demons. Accusing the priests of fraud, Ciculescu told the court:

“If they (the accused) represent the way of God then God’s ways are crooked. They did not remove the demons that made these bad smells as they promised to do, and I still see all sorts of demons in the form of animals, usually crows but also other such things, that are making my life miserable.

“When I am at home they switch the TV on and off all the time, they make foul smells that give me headaches and basically roam unhindered around my house and my business.”

Both a lower Romanian court and the Romanian High Court have rejected Ciculescu’s case, so he’s taking his appeal as far as it can go — to the European Court of Human Rights.

For Ciculescu’s sake, I hope the defense doesn’t cite the “he who smelt it, dealt it” law. And listen, who are we to judge? We didn’t see the attempted exorcism and we certainly haven’t smelled the unholy smells. I do have religious beliefs of my own, but I admit, I’ve yet to experience the presence of gassy spirits.

In any case, we wish Ciculescu luck. In the meantime, he might consider avoiding broccoli or other cruciferous vegetables (pun intended). Or maybe he should just hang up a sign or two. Heck, maybe even just burn some sage — couldn’t hurt, right? 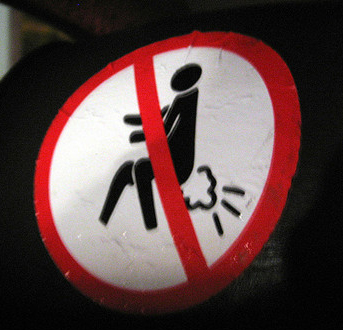 The farting imps could not be reached for comment for this story, though to be fair, I didn’t really try that hard. Sure, it sounds silly, but who wants to tempt fate, right?