Man Plays With Dog From Work With Robotic Surrogate 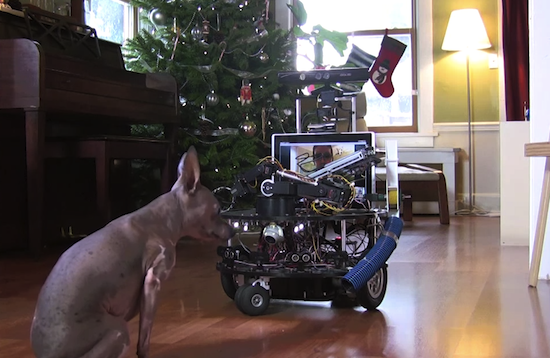 Jordan Correa and his wife had a problem. Because they both worked full-time jobs, they weren’t able to spend time at home during the day with their new dog Darwin. Instead of painfully readjusting their lives, Correa did what any man with training in robotics and engineering would do: He built a telepresence robot surrogate that he could control from work to play with his dog. You know, the obvious solution.

Correa’s creation, which he calls DarwinBot, uses a Parallax EDDIE chasis and programmed with the Microsoft Robotics Developer Studio 4. Which is convenient, because Correa is a developer in Micorsoft’s robotics division. The bot has several dog-friendly tools built in, such as a treat dispenser, a ball-launching ballista, a ball-retrieving robotic arm, and speakers so Darwin can hear his master’s voice.

Using the onboard slate PC, Skype, and a pan-and-tilt webcam, Correa can interact fairly naturally with Darwin. The bot also packs a Kinect camera system on top for obstacle avoidance and a downward facing webcam for ball retrieval. The whole thing is controlled over the Internet with an XBox 36o controller.

While it may seem hard to believe that this rolling mess of wires and cameras could command a dog’s attention, or at least not terrify it, Darwin seems to play well with DarwinBot. He comes when called, responds to some basic commands, and plays fetch with the robot. Whether or not Darwin recognizes Correa is another matter altogether, however. It seems more likely to me that the pup thinks of DarwinBot as the weird thing that throws balls and drops food on the ground when no one else is around.