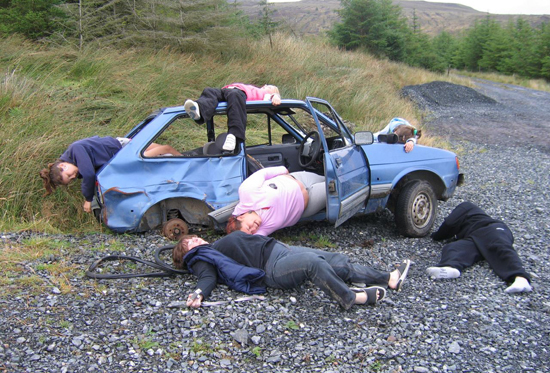 In an apparent bid to lump video games in with just about everything else, research published by the American Psychological Association says that teens that play risk-glorifying video games may be more likely to become reckless drivers. Playing games like Grand Theft Auto III, Manhunt, and — surprisingly enough — Spider-Man 2 was associated with an increase in risky driving, among other things. 25% of those interviewed at 16 admitted to one form of risky driving or another, whilst 90% did so at 18. Jeepers.

The research makes everything sound all doom and gloom, of course, but doesn’t come across as terribly persuasive. For example, this passage from ScienceDaily is essentially fear mongering:

The researchers determined the teens’ levels of sensation seeking and rebelliousness by asking them to rate themselves on a four-point scale following questions such as “I like to do dangerous things” and “I get in trouble at school.” The study controlled for variables such as gender, age, race, parent income and education and parenting styles described as warm and responsive or demanding.

“Playing these kinds of video games could also result in these adolescents developing personalities that reflect the risk-taking, rebellious characters they enact in the games and that could have broader consequences that apply to other risky behaviors such as drinking and smoking,” [lead author Jay G.] Hull said.

The final paragraph, however, sheds some light on the reality of the situation, though — it’s all just speculation:

The information regarding the teens’ driving habits was based on their own reports during the interviews, and therefore interpretation of the causes of their driving habits was speculative, the authors noted. “At the same time, because the study began when the participants were playing video games but were too young to drive, it is clear that the videogame exposure preceded the risky driving,” Hull said.

(via ScienceDaily, image via Danny McL)