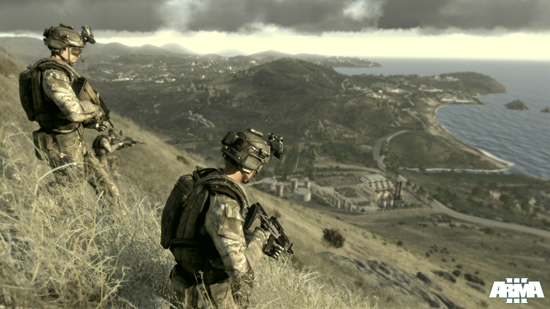 It shouldn’t come as a surprise that wandering around a foreign island taking video and photographs of military installations can be seen as kind of suspicious in the eyes of that island’s government. After all, any military is generally not going to be happy about such a situation. This is the unfortunate predicament that two Bohemia Interactive employees now find themselves in. The duo was arrested on Sunday on charges of espionage after conducting surveillance on the island of Lemnos for their company’s newest video game: Arma 3.

Lemnos, for those who aren’t aware, is Greece’s 8th-largest island and the actual setting for Bohemia Interactive’s Arma 3. The franchise, and the studio behind it, prides itself on being a realistic military simulator. As much detail as they can cram into the video game, they will. So, the obvious answer here is to collect as much information about the island as is possible to then depict within the video game. This “information” just so happened to include military installations.

The argument the two presented when arrested is that the various imagery collected only services to further enrich the graphics of the video game. Greece is obviously thinking this is either the response of an earnest and devoted employee, or that of a clever, sneaky spy. Given that they were arrested in the first place, the government is probably leaning toward the latter.