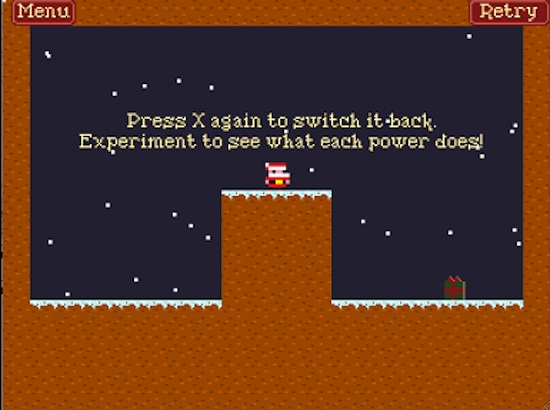 The gameplay of recently released platform puzzle game A Puzzling Present may seem on the familiar side, but it’s safe to say that no matter how well trod this side-scrolling puzzler may feel at times — when you’re reversing the gravity of a level with the push of a button, for example —  you’ve probably never played anything quite like it. That’s because the maps and gameplay for the game — in which you play a gift hunting Santa sprite tasked with retrieving presents using new powers that are reassigned every level — wer designed mostly by an artificial intelligence program known as ANGELINA.

The brainchild of Michael Cook, a PhD student at Imperial College, ANGELINA (shorthand for “A Novel Game-Evolving Labrat I’ve Named ANGELINA”) has designed simple platform games before, but A Puzzling Present represents a new level of complexity for the AI. Instead of a static set of rules that determines the entirety of gameplay, A Puzzling Present presents players with new skills at every level that they must use to complete a challenge. The AI does this using a system Cook calls Mechanics Miner, in which the AI designs a level with an unbeatable challenge, then devises a new play mechanic and tests to see if that mechanic makes the challenge possible to complete.

While the impressive work on display by ANGELINA demonstrates the leaps forward that artificially intelligent programs and software are taking in cracking the code of  creative work, the bot probably isn’t sounding the death knell for game designers quite yet. The graphics and music for A Puzzling Present, for example, are all still the brainchildren of human developers and artists. Even from a design standpoint, Cook doesn’t actually consider ANGELINA a threat to designers, but rather a tool they can use to experiment more easily and play around with designs they might not have otherwise considered.

In the spirit of experimentation that is built into the game, Cook and ANGELINA want to hear from players about what’s working in A Puzzling Present, and what factors still need some fine-tuning, letting players offer their opinions and advice on the difficulty of challenges after every level. If you want to weigh in on the game — or just get a glimpse of  what the future of video games designed by computers — though not for computers, yet — looks like in it’s infancy, you can download it from Google Play here.