They really Jerry'd this one.

After Rick & Morty revealed Rick’s obsession with McDonald’s discontinued Szechuan sauce, both reminding people that this was a thing that once existed and elevating it to cult obsession status in the same moment, the fast-food chain took the opportunity to cash in on the craze. They sent a jug of the sauce, which was originally a promotional product for Mulan, to the show’s co-creator Justin Roiland, as well as to a few fans. Then they announced they’d be re-releasing the sauce for one day only, along with the launch of their new buttermilk chicken tenders.

The sauce, tenders, and posters were only stocked at select locations, with limited supply. On their website, they wrote, “And when we say limited, we mean really, really limited!” Even with that warning, McDonald’s definitely overshot the mark of “exclusivity hype” and landed in “disappointing PR disaster” territory. For a sauce that sold for $15,000 on eBay, you might think they’d have known fans would line up around the block for this. And you might also have expected them to provide locations with more than TWENTY PACKETS EACH, as is being reported. Some locations listed on the website as being a Szechuan spot allegedly didn’t have any supply at all.

Cops are at Wellington McDonalds where tons of angry people lined up for hrs for Rick and Morty Szechuan sauce only to learn they had none pic.twitter.com/3T272osid4

The bigger problem is you lied about locations getting it, people went where you said to go, and employees had no clue.

Anyone know how to bring a class action suit against @McDonalds for false advertisement? Asking for a few thousand friends #szechuansauce

And of course, some of those lucky fans who did manage to get the sauce have already put theirs up on eBay.

Probably the funniest thing to me so far about the ric and marty szechuan sauce thing is what people are trying to sell on ebay.
R
I
P pic.twitter.com/59OcFRtpga

For a joke- I listed my Szechuan Sauce on eBay for $750…someone just bought it! Who said nerds were always broke! pic.twitter.com/vGfVbsThL7

@FortuneMagazine The most ridiculous McDonald's Szechuan sauce listing on eBay yet… $60 for a .5mL taste. pic.twitter.com/ZMr0W2RRpn

Out of curiosity, I checked eBay to see what’s for sale, and saw people selling the sticker tops to their sauce packets, a “do it yourself recipe” for the sauce, an empty buttermilk tenders box, and–my personal favorite–a framed picture of someone’s sauce packet. 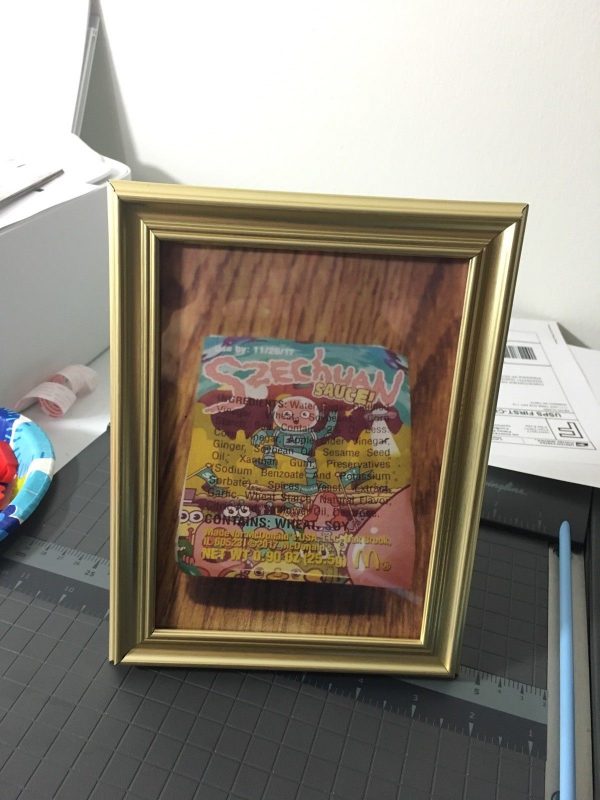