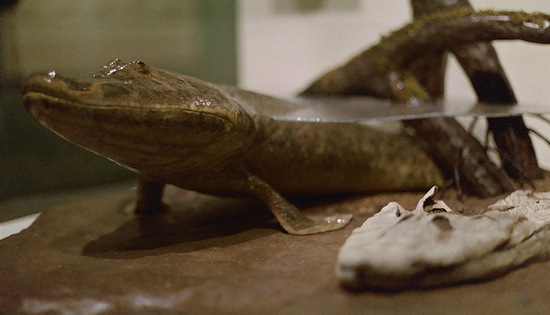 It is at this point fairly well uncontroversial to state that yes, man evolved from apes. What many don’t know, though, is that evolution goes much further further back, to when one fish-like common ancestor rebelled against the status quo, hauled itself up onto terra firma, and over the course of generations, grew limbs, consequences be damned. A study led by Dr. José Luis Gómez-Skarmeta and Dr. Fernando Casares of the CSIC-Universidad Pablo de Olavide-Junta de Andalucía in Seville, Spain, suggests that the administration of an extra copy of  the gene Hoxd13 in the fin of an embryonic zebrafish yielded the same sort of fin-to-limb development that would likely have seen during the evolution of ancient fish into land-based vertebrates.

When the Hoxd13 was introduced into the zebrafish embryo’s developing fin, researchers noted that production of cartilaginous tissue began to take place, while fin tissue in turn gradually diminished relative to the formation in the limb limbs. Going by these results, researchers pondered whether a Hoxd13 control element was responsible for increasing the production of the particular gene that incited this change in ambulatory fish. However, the modern aquatic descendents of these progenitors of nearly all land-based lifeforms are actually devoid of this element that controls Hoxd13 production.

Researchers borrowed the Hoxd13 control element from a mouse and placed it within the embryo of a zebrafish — the lab mouse of the sea. As per predictions, the control element activated the production of Hoxd13 within the fish, forming limb-like appendages instead of fins. Of this outcome, Dr. Casares said:

We found that in the zebrafish, the mouse Hoxd13 control element was capable of driving gene expression in the distal fin rudiment. This result indicates that molecular machinery capable of activating this control element was also present in the last common ancestor of finned and legged animals and is proven by its remnants in zebrafish.

Look, let’s not dance around the issue any longer, we’ve seen and read enough science fiction fare to know where experiments like these are going. Today it’s just small doses of Hoxd13. But down the line researchers are going to be incorporating human DNA along with this limb production, pushing us ever closer to the day we kneel before our zebrafish-men overlords. Though there are probably worse fates, we can’t think of any right off the tops of our heads.