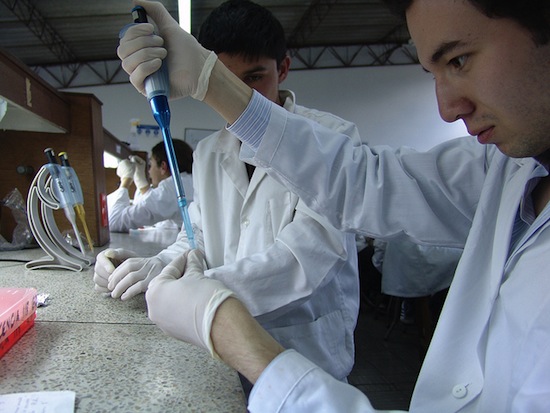 Scientists at the University of Edinburgh have discovered a new gene they believe could explain how humans evolved from apes. This is a big discovery — a sort of genetic “missing link” that marks the point where humans really began to diverge from other animals. Although we’re still waiting for researchers to find the gene that would allow apes to become super-intelligent and overthrow mankind, this is probably a good start.

What do humans have that apes and other mammals don’t? A little thing called gene miR-941. As far as genes go, it’s pretty much the best one. Take that, other animals! University of Edinburgh team members believe that miR-941 could be the key to the development of the modern human brain, and an important step on the path that led to humans to perfect the skills that separate us from other animals, like decision making, language, and the ability to use tools. Alright, decision making might not seem like our biggest strength sometimes, but we sure can talk and use tools.

It seems like miR-941 came around after humans evolved from apes and at just the right moment to give humans a real edge over other mammals, some time between six and one million years ago. This was when we as a species were really out there making strides like the genetic champions we are. The leader of the study at the Institute of Genetics and Molecular Medicine at the University of Edinburgh, Dr. Martin Taylor spoke about the gene’s perfect timing.

This new molecule sprang from nowhere at a time when our species was undergoing dramatic changes: living longer, walking upright, learning how to use tools and how to communicate. We’re now hopeful that we will find more new genes that help show what makes us human.

And this kind of research could lead to just that, discovering more new genes, and that’s really exciting. Hopefully these researchers will find more genes that explain why we’re not the same as those damn, dirty apes.

(via University of Edinburgh)