Protozoa Capture Algae And Steal Their Genes To Evolve, Eventually Turn Into One Species 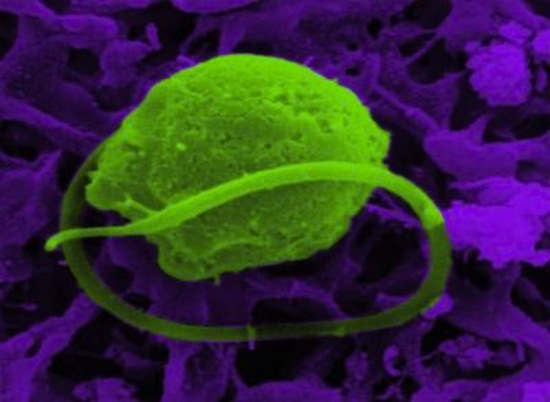 If you’re a tiny, single-celled animal like a protozoan, photosynthesis is a pretty neat ability, as being able to make food just by laying in the sun is significantly easier than going out and hunting down your own meals. Unfortunately for protozoa, photosynthesis is also a rather tricky proposition, requiring millions of years of evolutionary practice to evolve. One species has developed its own workaround for that small problem, though — it got the best of both worlds by absorbing algae cells and stealing the genes that control photosynthesis right out of their DNA and confirming that, yes, evolution in the real world works pretty much exactly the way it does in Spore.

Researchers have theorized for a while that evolutionary leaps are the result of DNA theft, but it’s been difficult to prove. A new study led by researchers at Dalhousie University and published this week in the journal Nature suggests that scientists may have the first hard evidence for the practice.

Researchers sequenced the genomes of a pair of algae species, each of which had the strange distinction of having a pair of nuclei, where most animal and plant cells just have one. The surprising results showed that the algae are actually a peculiar form of plant-protozoa hybrid, forever bonded by the forces of evolution with the protozoa predators who once stole their most precious genes.

Researchers theorize that initially, protozoa absorbed the algae, but didn’t digest them, instead breaking them open and harvesting the DNA that would allow them to photosynthesize light into food. After many, many generations of doing this, the protozoa and the algae moved past their unhealthy prisoner and guard relationship, becoming more and more dependent on one another for survival. Eventually, this saw the two species enter into a state of endosymbiosis where each lives alongside one another in a single cell.

While the research is interesting from a evolutionary perspective, it may end up being more useful from an energy-producing one. Stealing photosynthesis genes is, as we said, a pretty neat trick, and one that many researchers would like to harness to improve the efficiency of solar cells used to power human homes. After all, if it’s a good evolutionary tactic for protozoa, it may be a good one for us as well. Let’s just try and avoid physically bonding with any single-celled plants or animals in the process — it seems kind of cramped in there.