Many Game of Thrones fans are incredibly creative. Some are also business owners. Larry Watson, owner of Percy’s Tavern in New York, just so happens to be both, much to the delight of all of those who went to his bar last night — including myself. Along with Claudia Smith, pastry chef and owner of the Westeros themed bakery Enchanted Edibles, he put on a Feast of Ice and Fire complete with dead boars, goblets full of booze, and women dressed like medieval prostitutes. And you missed it! You poor, sad sack, you. (To TV-only fans: Beyond here there be minor spoilers for the next episode. Nothing too explicit unless you’re really good at deciphering context clues, but you’ve been warned nonetheless.) 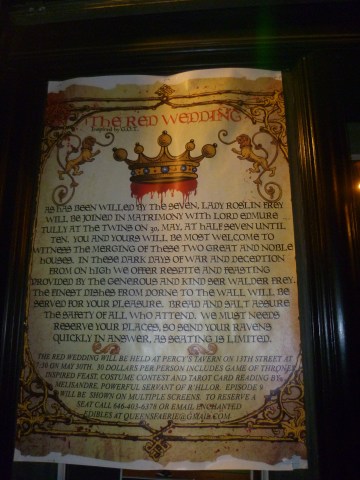 Originally the event had been conceived of as a reenactment of the upcoming Red Wedding, but then HBO had to go and move their viewing schedule around so that the episode in question hasn’t actually aired yet. To save their guests from spoilers, the Tavern reworked it into a very loosely inspired banquet, and played last week’s episode, “Second Sons,” on TV screens around the bar instead. Hey, there was a wedding in that, too, right? But never mind all that. Let’s get down to what you really care about, which is food porn and pretty girls. It’s okay, we understand.